We’re finally inching toward a smarter understanding of ‘electability.’

Many Democratic voters are agonizing over whether they should support their favorite candidate or the one who is most likely to defeat President Trump next fall. The problem is that the "electability" debate often proves hopelessly flawed, and for a time that looked to be happening again.

But that might be changing. The discussion around electability might be expanding beyond its usual narrow borders, in ways that could bring it in closer alignment with reality.

Let's give credit to Sen. Kamala D. Harris (D-Calif.) for challenging the conventional wisdom on this topic. This is what she said in a Sunday speech:

There has been a lot of conversation by pundits about "electability" and "who can speak to the Midwest?" But when they say that, they usually put the Midwest in a simplistic box and a narrow narrative, and too often their definition of the Midwest leaves people out. It leaves out people in this room who helped build cities like Detroit. It leaves out working women who are on their feet all day—many of them working without equal pay. And the conversation too often suggests certain voters will only vote for certain candidates regardless of whether their ideas will lift up all our families. It's shortsighted. It's wrong. And voters deserve better. 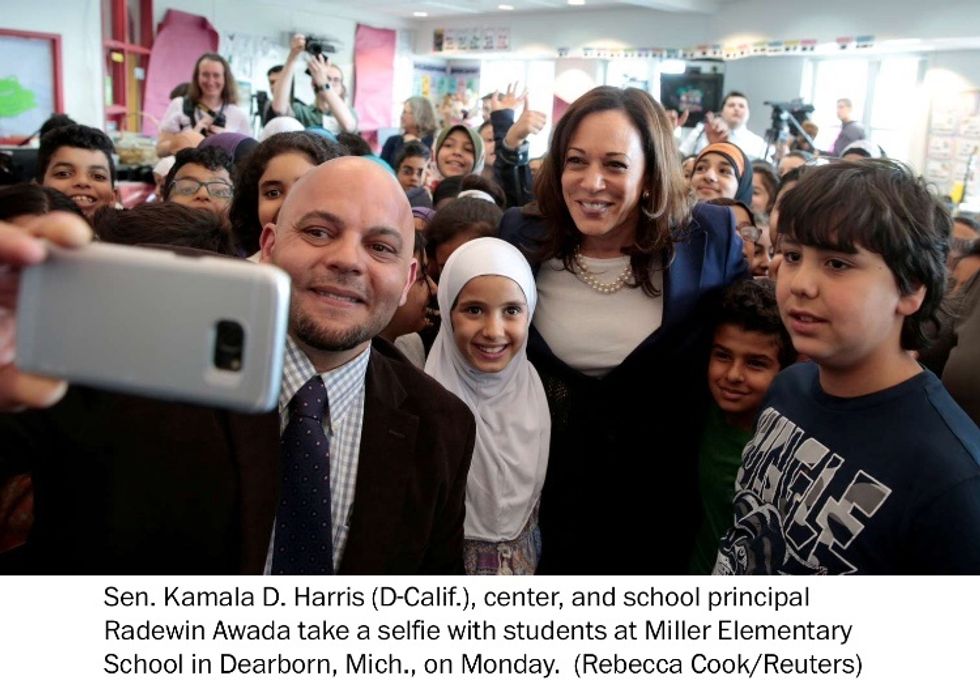 In other words, whenever we talk about electability there's an assumption — often stated quite explicitly — that to be electable means to be able to appeal to whites — particularly white men. When Harris pleads to consider African American voters as part of that conversation, she has a strong case to make. Turnout among African Americans dropped precipitously from 2012 to 2016; had Hillary Clinton duplicated Barack Obama's ability to get them to the polls, she would be president.

The point isn't that boosting African American turnout offers the only path to success, but that it's one of many factors to consider, instead of talking as though the only voter who matters to an electability discussion is a 60-year-old white guy sitting in a diner in Sheboygan.

The other big question in this debate is gender. Large numbers of Democrats, justifiably traumatized by 2016, have decided that despite all the formidable women running, the only way to beat Trump is with a man. Many voters arriving at that conclusion are women.

There are a couple of ways you can look at that sentiment, both pretty depressing. The first is that these women are making a coldly rational decision. After 2016, they realized that misogyny is such a powerful force in our politics that it simply cannot be overcome, at least not for the moment. When a politician can be accused of sexual misconduct by a dozen women, get caught on tape bragging about committing sexual assault and still get elected, it's not something you can wish away.

The second way to look at this is that many Democratic voters have concluded that only someone with a profile like Joe Biden's can win because they keep getting told over and over that being white, male and a policy centrist is what it means to be electable. After having this message beaten into them by a thousand pundits and journalists, eventually they succumbed.

History tells us that our assessments of who is electable usually turn out to be wrong. Trump and Obama looked completely unelectable at the outset of their campaigns, while supposedly electable candidates such as Hillary Clinton, Mitt Romney, John McCain and John Kerry ended up losing.

The right conclusion to draw from that history isn't that it's completely futile to even consider electability, but that we've been using the wrong criteria to assess it. The discussion is filled with propositions that sound reasonable but utterly fail in practice, like the idea that centrists must be more electable or that candidates who produce too much enthusiasm from their party's base are suspect.

The biggest problem, however, might be that we trap ourselves into considering what type of candidate seems electable, then match that up to the available options. But we don't elect types; we elect individuals.

Let's take one example. We'd all agree that we don't want our party to nominate someone who might get caught in too many controversies or outright scandals. But nearly every candidate will face at least a potential scandal at some point. The real question is how resilient they'll turn out to be, how skillful they are at dealing with the crisis.

Bill Clinton was a ticking time bomb of scandals, but he also had the ability to overcome them. When Republicans tried to turn his pastor into a scandal and activate racist fears, Obama defused the issue with a thoughtful and empathetic speech on race. Hillary Clinton couldn't overcome the absurdly overblown issue of whether she used the wrong email.

You don't have to think that was entirely (or even mostly) her fault to acknowledge that getting past controversies was not Clinton's strong suit as a candidate. The point is that the scandal factor isn't about what's in the candidate's record as much as it is about their ability to deal with it in the context of the campaign.

To bring it into the present, Biden has lots of potentially controversial things in his past that could be problematic; his handsiness with women and his performance during the 1991 Clarence Thomas confirmation hearings have already come up. How much confidence do you have in him based on how he dealt with those controversies? How would that compare with how you think other candidates will deal with their next mini-scandal?

It's hard to know for sure, of course. But at the very least, we need evidence for any electability claim, as Bill Scher argues. If a candidate says she can increase turnout among Latinos, we should ask how she plans to do so, and see whether the answer sounds plausible. If a candidate says he'll win over Trump voters, we should demand proof that goes farther than his race and gender, or his birth in a sufficiently hardscrabble town.

Most importantly, if we're going to talk about electability, then we have to keep the discussion as wide and inclusive as possible. Then we'd at least stand a chance of getting it right.

Paul Waldman is an opinion writer for the Plum Line blog. Washington Post, May 7, 2018.

Voices4America Post Script. Democratic voters are agonizing over "electability," but if we think that makes old white men the "safe" choice to beat Trump, we are missing what reality tells us. This article may just open your mind.