Trump’s goons were up to something very shady in Ukraine.

Last night, the House Intelligence Committee released several documents provided by Lev Parnas, one of the crooks President Trump recruited to help run his Ukraine extortion scheme. Two of the documents in the collection stand out in sharp, mordant contradistinction.

One of them is a series of messages between Parnas, who met with Trump on several occasions and claims the president personally directed his mission in Ukraine, and Robert Hyde. A beefy retired Marine and current Republican congressional candidate, Hyde made several chilling remarks that seemed to indicate that he was surveilling Marie Yovanovitch, the U.S. ambassador to Ukraine, and prepared to do something to her.

Reading these messages makes clear Hyde was planning to do something unpleasant to Yovanovitch, apparently in tandem with some kind of security personnel he contacted, perhaps Russian ones:


She under heavy protection outside Kiev.


She's talked to three people. Her phone is off. Computer is off.


She's next to the embassy.


They know she's a political puppet.


They will let me know when she's on the move


They are willing to help if you/we would like a price.


Guess you can do anything in the Ukraine with money… what I was told.


If you want her out, they need to make contact with security forces

Contacted last night by the Daily Beast, Hyde did not elaborate on his activities in Ukraine, simply texting, "Bull Schiff is a giant b*tch," a message unlikely to dispel the impression of goonery formed by his texts.

In the end, Yovanovitch managed to get out. But it was a close-run thing. Yovanovitch testified that she was pulled out of an important ceremony to take an urgent call from a superior instructing her to "get on the next plane to the U.S.," which she did. Yovanovitch's work had posed a threat to the corrupt, pro-Russian figures in Ukraine who had been working closely with Parnas, Giuliani, and their other partners.

Several months later, even after she had been removed from her post, President Trump appeared intent on doing some kind of harm to Yovanovitch. "Well, she's going to go through some things," he told Ukrainian president Volodymyr Zelensky in his July 25 phone call. In the next sentence, Trump promised, "I will have Mr. Giuliani give you a call."

The second document is a letter from Giuliani to Zelensky. By the time of the July phone call, the Ukrainian president appeared to know full well who Giuliani was and what role he was playing. But in early May, when he sent the note, Giuliani still needed a letter of introduction to the new Ukrainian leader.

What is remarkable about the letter is the degree to which it inverts the relationship between a representative of the world's richest and most prestigious democracy, on the one hand, and the leader of a small country notorious for its corruption. Giuliani's letter explains that, even though he holds no government position at all, he represents the president of the United States in a private capacity: 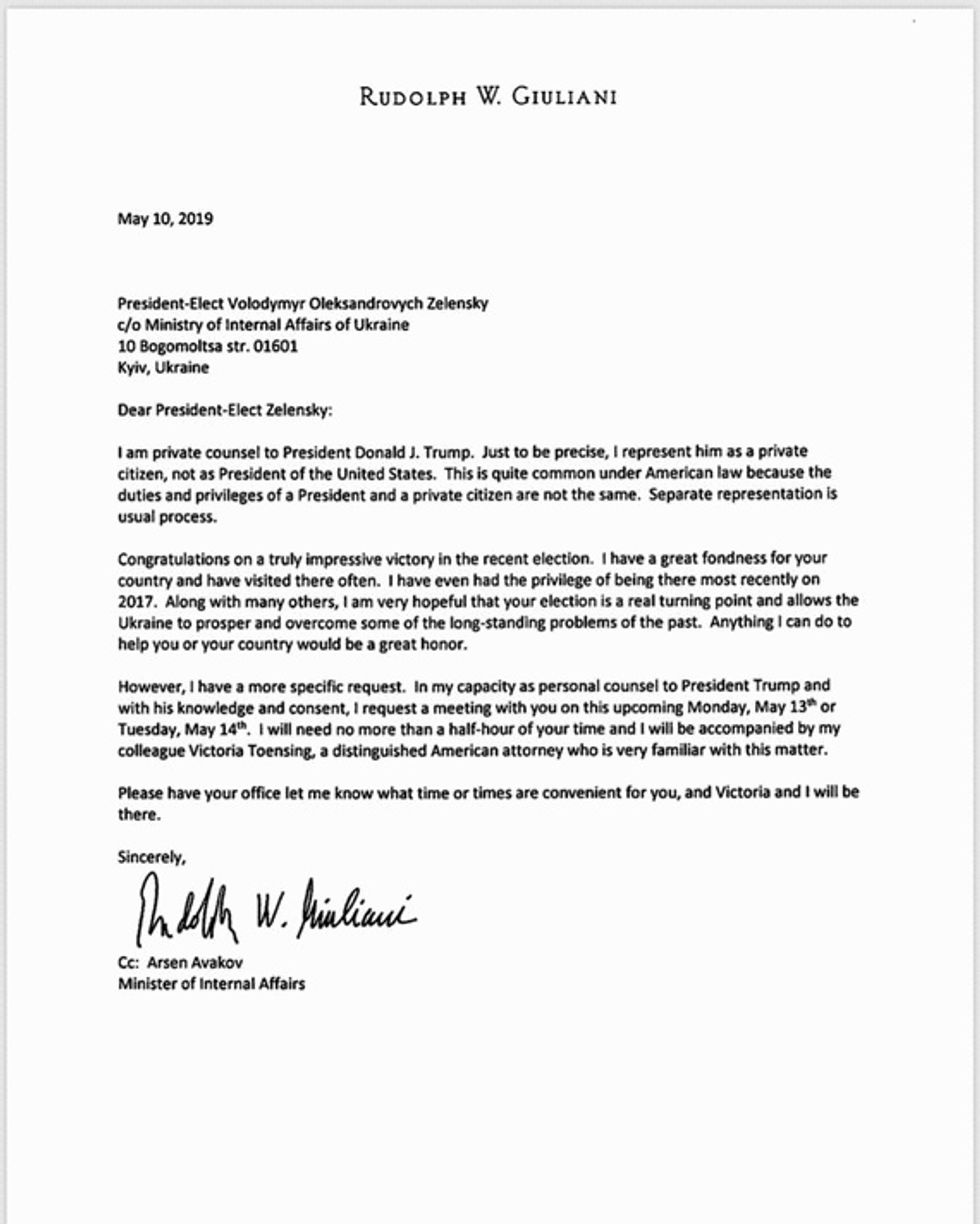 One would expect to find an exchange between an American and a Ukrainian official in which the point was, effectively, Don't worry if this sounds shady, that's just the way things are done in my country. What's remarkable is that this is being said not by the Ukrainian to the American, but the other way around.

Of course, the oddity Giuliani is trying to explain to Zelensky is the entire scandal. He is conducting diplomacy, using the power of the federal government, on behalf of Trump's interests as a private citizen. This is so obviously improper that Giuliani realizes it will appear improper even to a politician from a country rife with corruption.

Trump's defense has hinged upon the fact that, in his conversation with Zelensky, Trump said "do us a favor," which he claims must mean the United States, not his private interests. "With the word 'us' I am referring to the United States, our Country," he tweeted last month. "I said do us a favor, not me, and our country, not a campaign," he wrote in his diatribe to Nancy Pelosi.

Giuliani's letter to Zelensky could not have refuted this defense any more effectively. He states in writing he represents Trump "as a private citizen, not as President of the United States." And he proceeds to note that he is doing so "with his knowledge and consent."

The Giuliani letter is a written confession of the president abusing his power. The Parnas-Hyde texts are evidence of how the whole scheme played out on the ground, which is basically as an episode of The Sopranos. And as the sordid evidence of the scheme continues to pour out, it remains the position of the Trump administration and nearly every elected Republican that Congress is not entitled to to any additional testimony or documents. One can only imagine what a full accounting of the scandal would find.

Voices4America Post Script. Everyone was in the loop! Lev Parnas on #Maddow: "President Trump knew exactly what was going on." Pence, Barr, etc. Ambassador Yovanovitch in danger had to "get on the next plane to the U.S."