Slow Response to the Coronavirus Measured in Lost Opportunity

If the administration had reacted to the ventilator shortage in February, a private sector effort starting now might have made lifesaving equipment in mid- to late April. Now it is unlikely to be before June.

WASHINGTON — When Ford's chief executive, Jim Hackett, announced on Tuesday that the carmaker would team up with General Electric to build ventilators, he tempered the good news with a note of caution: "We're talking about early June."

That was just one of several examples that underscored the price of the Trump administration's slow response to evidence as early as January that the coronavirus was headed to the United States.

For the first time, it is now possible to quantify the cost of the lost weeks, as President Trump was claiming as recently as February that in a "couple of days" the number of cases in the United States "is going to be down to close to zero."

Ford's timeline suggested that if the administration had reacted to the acute shortage of ventilators in February, the joint effort between Ford and General Electric might have produced lifesaving equipment sometime in mid- to late April.

The administration also said Tuesday that for the first time it was using the Defense Production Act, a Korean War-era law, to mandate the production of 60,000 coronavirus test kits.

That is a tiny fraction of the tens of millions needed, and it raised the question whether the scarcity today would exist had the White House moved faster more than a month ago, after the Centers for Disease Control and Prevention fumbled its first effort to send out a test. Commercial laboratories could have produced their own tests earlier, according to industry officials.

The gap between the production timelines and the need for immediate supplies led to a scathing assessment from Gov. Andrew M. Cuomo of New York. New York accounts for more than 25,000 cases, more than half the total in the country, he said, but it has received only 400 ventilators from the federal government. 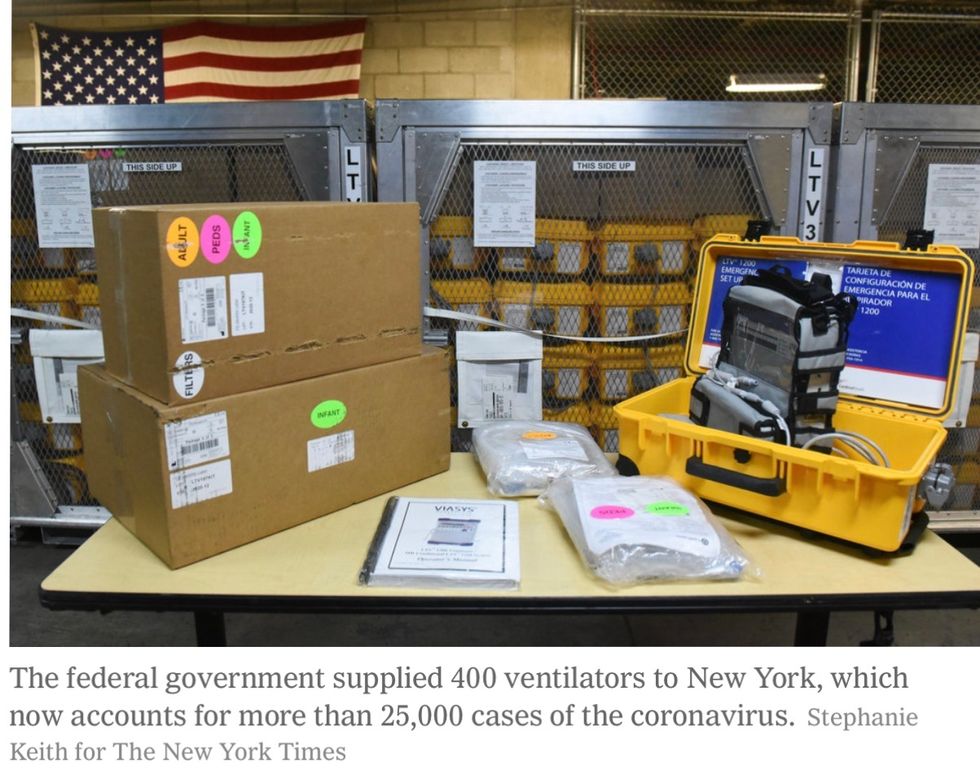 Mr. Trump is caught between his desire to be proactive and optimistic, and the crushing realities of the numbers. For the past two weeks, the administration has usually avoided indicating the number of ventilators, masks or personal protective equipment that it has distributed. That changed on Monday, when Rear Adm. John P. Polowczyk, a senior logistics officer for the Joint Staff at the Pentagon, began specifying delivery quantities.

Mr. Cuomo crystallized the issue on Tuesday when he said that "the timeline doesn't work."

The reality is that timing is impossible, producers of the equipment say. For example, Medtronic, one of the leading manufacturers of ventilators, now makes about 225 of its high-end machines each week, up from 100 in more normal times. But it is a daunting task because there are 1,500 unique parts supplied from 14 countries. The company is aiming for 500 a week, a Medtronic spokesman said. Even that would not satisfy current demand.

Last week, Mr. Trump urged states to fend for themselves, looking for whatever they could find on the open market. But that only underlined how poorly prepared federal stockpiles were for a pandemic — a situation that the last three administrations had rehearsed in an effort to improve plans. The president's comments set off a scramble that only accelerated the criticism of how the White House has handled the allocation of scarce supplies.

Mr. Trump responded that Mr. Pritzker and other governors "shouldn't be blaming the federal government for their own shortcomings. We are there to back you up should you fail, and always will be!"

But it is increasingly clear that the federal government will not be able to back up the states, at least at the scale needed, for the first wave of patients. And by letting companies voluntarily produce the necessary equipment, rather than under orders in the Defense Production Act, the administration is not responsible for whether the quotas are met, or if the output reaches hospitals.

Ford's new partnership with GE Healthcare and 3M aims to produce about 1,000 respirators a month, using fans from F-150 trucks, the most widely sold in the United States, and parts made on 3-D printers. But Mr. Hackett noted that those parts would have to be merged with electronics produced by other suppliers.

Plastic face shields, which are far less complex, will begin to be delivered this week in smaller quantities in Detroit, officials at Ford said, with a goal of producing 100,000 a week.

Peter Gaynor, the Federal Emergency Management Agency administrator, told CNN on Tuesday that the administration was only using the Defense Production Act when it was needed.

Mr. Gaynor also said the administration would insert language from the law into a mass contract for 500 million masks. "We want to be thoughtful and meaningful on how we do it again for the best result," he said.

While Mr. Trump signed an executive order last week invoking the law, he did not immediately use it. Instead, he elected to count on companies volunteering to make the equipment and materials. Mr. Trump said six million masks were donated to FEMA in recent days. But it is not clear if that is accurate, or when and where they will be delivered.

Industry officials have been in and out of the White House in recent days, trying to build a database of stockpiles and suppliers. But they said that system was largely being built from scratch.

"The federal government's most urgent tasks is to accelerate the flow of vital supplies to our front line workers,'' said Representative Elissa Slotkin, Democrat of Michigan, a former C.I.A. officer who is on the House Homeland Security Committee.

She said she was introducing legislation to require the administration to enforce the Defense Production Act. But that may well be for a future crisis, not this one.

Voices4America Post Script. If Trump had reacted to the ventilator shortage in February, a private sector effort lifesaving equipment have given us ventilators in mid- to late April. Now it is unlikely to be before June. #TrumpIncompetence

Trump and his cronies don’t want to use the power of the federal government even to save lives:

“At his news conference on Sunday, Mr. Trump defended his decision not to implement the Defense Production Act despite an outcry from state governors and Democrats.

"Call a person over in Venezuela," Mr. Trump said. "Ask them, how did nationalization of their businesses work out? Not too well. The concept of nationalizing our businesses is not a good concept."

The president's top trade adviser said that, in fact, the act had spurred the country's "industrial base" to voluntarily mobilize, allowing for the quick conversion of corporate production facilities to produce medical supplies. Some of the president's advisers have privately said that they shared the longstanding opposition of conservatives to government intervention and opposed using the law, and the president has repeatedly signaled his own ambivalence about it.

in summary, Trump and his cronies have embraced a radical #NoGovernment agenda, except of course, when planning the bailout slush fund for businesses that Trump calls friend.