(CNN) As the number of coronavirus cases in the United States continues to rise and the markets continue to drop, President Donald Trump has increasingly sought to blame China for the spread of the virus, and his re-election campaign is following his lead.

"America is under attack -- not just by an invisible virus, but by the Chinese," an email sent by the Trump War Room operation to surrogates, strategists, outside advisers, and press, said.

The email, which comes as Trump has stepped up his efforts to scapegoat China for coronavirus, sought to attack Democratic presidential candidate Joe Biden for "siding with the Chinese" amid disinformation about the virus. But it also neglected to account for Trump's new tone toward China after initially praising President Xi Jinping as the virus spread.

The Trump campaign cited Biden's criticism of Trump calling the pandemic a "foreign virus" as "(falling) back on xenophobia" and Biden adviser Ron Klain's praise for China's government for quickly building hospitals as evidence of Biden siding with China. Many public health experts have criticized Trump's labeling of the virus as "Chinese."

The campaign also cited comments from Biden the same day Trump announced China travel restrictions as evidence the former vice president "sided with China." Biden did not specifically note the restrictions, but called out the President's "record of hysteria and xenophobia, hysterical xenophobia, and fear mongering" during a speech to supporters. Trump has repeatedly said that decision saved American lives. The Biden campaign responded saying the Trump campaign was projecting.

This is projection, pure and simple -- a classic Trump campaign move. They are trying to attack Vice President Biden on an issue that President Trump has badly mishandled. Weeks ago, Vice President Biden called for President Trump to press China for greater transparency about the origins of the virus, which could have helped limit the spread of the virus and which now would help our scientists and public health professionals combat the epidemic here at home. That hasn't happened," Biden spokesman TJ Ducklo said in a statement. He added: "Instead, Trump lavished praise on Xi Jinping for his handling of the outbreak. So, instead of obvious, and frankly lame, efforts to deflect responsibility, why doesn't President Trump do his job?"

The Trump campaign defended the email Thursday, saying it's "indisputable" the virus originated in China "and that the Chinese government concealed valuable information that would have helped the rest of the world mobilize sooner.""Also troubling has been the eagerness of the American news media to carry water for the Chinese Communist government and attempt to silence accurate descriptions of the origin of the crisis," said Trump campaign communications director Tim Murtaugh.

That assertion comes as journalists from US outlets in China have faced a crackdown, and in some cases, expulsion, by the government at a time when reporting and accountability is critical.Trump has drastically changed his tone toward China in recent weeks, doubling down this week on calling Covid-19 the "Chinese virus," which the email noted.

After consulting with medical experts, and receiving guidance from the World Health Organization, CNN has determined that that name is both inaccurate and is considered stigmatizing.The first reported cases of the virus were in Wuhan, and scenes from the city on lockdown shocked the world. The lockdown gave an early indication of how seriously global authorities would need to combat the fast-spreading virus.

"Viruses know no borders and they don't care about your ethnicity or the color of your skin or how much money you have in the bank," said Dr. Mike Ryan, executive director of the World Health Organization health emergencies program. "It's really important that we be careful in the language we use."

But Trump's attempt to rewrite history on his response to the virus ignores his comments as the outbreak spread across China. He claimed to have the virus "under control," that the virus could vanish by April with warmer weather, and criticized Democrats and media for overhyping the situation. When the first case of coronavirus was diagnosed in Washington state in late January, Trump said he was not concerned about a pandemic. "Not at all. And -- we're -- we have it totally under control. It's one person coming in from China, and we have it under control. It's -- going to be just fine," he said during a January 22 appearance on CNBC. And asked if he trusted the Chinese government to be transparent, he said: "I do. I do. I have a great relationship with President Xi."

He praised the Chinese government's "transparency" on January 24.

“China has been working very hard to contain the Coronavirus. The United States greatly appreciates their efforts and transparency. It will all work out well. In particular, on behalf of the American People, I want to thank President Xi!" he tweeted.

On February 7, he told reporters, "China's working very hard. Late last night I had a very good talk with President Xi and mostly we talked about the coronavirus. They're working really hard and I think they're doing a very professional job."

The Trump campaign email cast suspicion that China was behind a cyberattack directed at the Department of Health and Human Services, despite no such statement from officials. The department did not immediately respond to a CNN's request for comment.

The email also highlighted Trump's comments that China has tried to blame American servicemembers for causing the outbreak.

CNN previously reported that a prominent Chinese official has promoted a conspiracy theory that the US military could have brought the novel coronavirus to China -- and it did not originate in the Chinese city of Wuhan.

Parts of Chinese social media, and even the country's government, appear to have launched a concerted campaign to question the origin of the novel coronavirus, which has infected more than 190,000 people globally as of Thursday midday, according to CNN's case tracker.

Campaign follows Trump's lead, hitting China and Biden amid coronavirus crisis, was the original CNN title. I chose my own.

Voices4America Post Script. Trump, Trump, who fails the American people each day with regard to this Pandemic, is trying to blame China. His Campaign has now followed suit, sending a email message, “America is under attack -- not just by an invisible virus, but by the Chinese."

#TrumpRacism inspires violence against Asians. Here is one sad story. 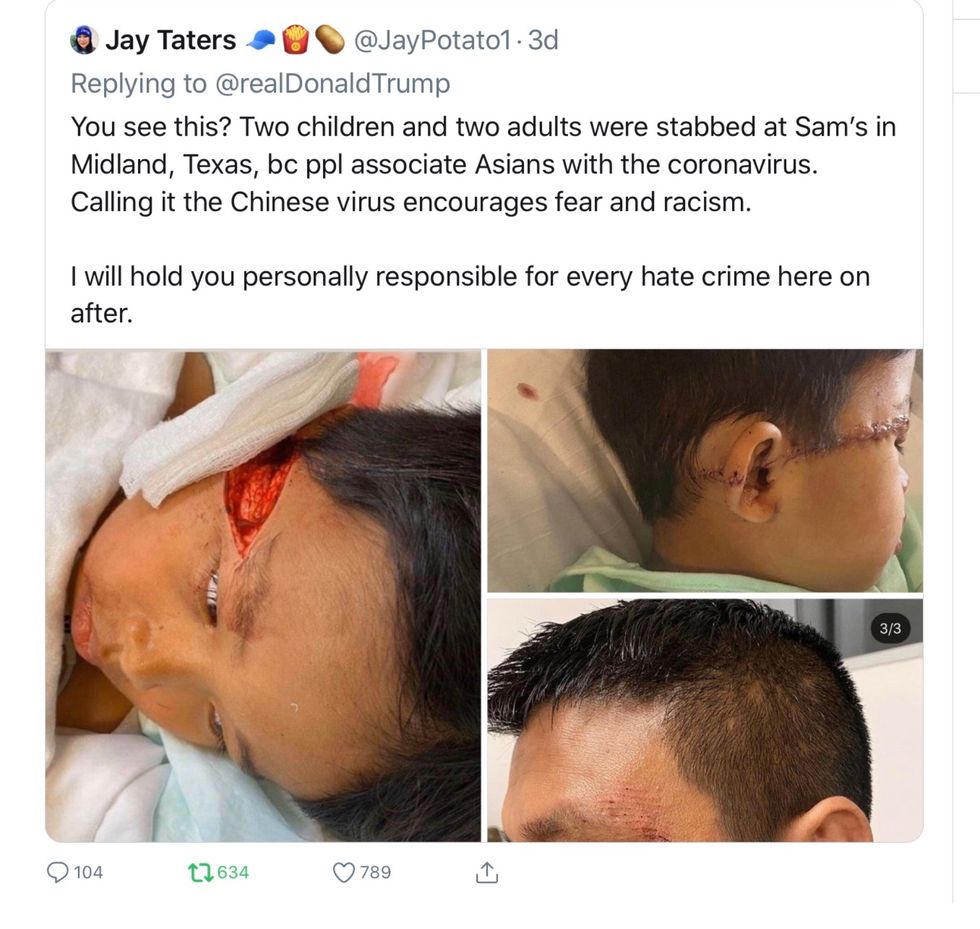 Here is another Commentary too, this by the Michelin starred chef/owner of Jejun Noodle Bar in NYC, on the violence inspired by Trump:

"Then I went into the restaurant to talk to my staff. We were going to do a delivery and pickup system, but on Monday, my staff started raising their concerns more. Most of them come from Asian backgrounds. They told me that they have felt threatened on public transportation, and after the mandate happened they felt more scared. My head chef told me, "I don't feel safe being on public transportation." I was like, "Okay, that's a different situation."

My staff was concerned that they would get jumped or beat up by some random people because they're Asian. That, for me, is more scary than anything else. They feel like they are looked at as almost alien because they are Asian. I had started feeling like it could be a little too dangerous, because I was hearing some other Asian people were getting jumped, too. We just felt that maybe I needed to stop this whole operation and think of the safety of our own employees. What happens if somebody is jumped somewhere on the way to work? That is the last thing I want to hear. There are crazy stories. One of my friends owns Chinese restaurants here, and her son, who lives in a very good neighborhood, recently got jumped by three white dudes in his building's elevator."

Remember what Trump has done, and how Trump has made everything worse. #TrumpVirus #TrumpPandemic #RemoveTrump2020

Jared Kushner is going to get us all killed.

Our Dunning-Kruger president: Trump's arrogance and ignorance are killing people.

Jared Kushner is in charge of the medical supply chain that delivers critical items to the doctors and nurses who are on the frontlines everyday. Yesterday he said it was “OURS”, so I asked what he meant. Trump did not like the question. https://t.co/pZfQiNVWne

Tucker Carlson calls for Senator Burr to resign and await prosecution for insider trading if he cannot provide a reasonable explanation for his actions. He goes on to say it appears that Senator Burr betrayed his country in a time of crisis https://t.co/bnIG6aJ42W 07

By law, firing an IG requires the President to provide a reason. That means a valid reason. “Loss of confidence” that results from the IG exercising his independence and doing his job is not a valid reason. This requires immediate oversight hearings. https://t.co/asqmOXCGxB

I'd be willing to give him a variety show if he agrees to leave the White House immediately. https://t.co/RXuTGg8ONJ

Interesting from https://t.co/8SZOIc0sFp. Trump voters souring on Trump’s response to the crisis. https://t.co/ibrafKLdXn