Threats of 'retribution,' more accusations of 'fake news' and the end of the White House briefing made 2019 the darkest yet for journalists in the Trump era.

By Michael M. Grynbaum i

On Twitter, President Trump deployed the phrase "fake news" 273 times this year — 50 percent more often than he did in 2018. He demanded "retribution" over a "Saturday Night Live" sketch, declared that Washington Post reporters "shouldn't even be allowed on the grounds of the White House," and accused The New York Times of "Treason."

Four American journalists were barred from covering the president's dinner with the North Korean leader, Kim Jong-un. The administration argued in court that it had the right to ban a reporter from the White House. The daily White House briefing ceased to exist. And a new press secretary rarely spoke in public outside Fox News.

Mr. Trump's vilification of the news media is a hallmark of his tenure and a jagged break from the norms of his predecessors: Once a global champion of the free press, the presidency has become an inspiration to autocrats and dictators who ape Mr. Trump's cry of "fake news."

For those who wondered if Mr. Trump might heed the concerns of historians and First Amendment advocates — who say his actions have eroded public trust in journalism, and perhaps the very concept of empirical facts — 2019 provided a grim answer.

"Intimidation and vilification of the press is now a global phenomenon," the former Fox News anchor Shepard Smith, who quit the network this year after disagreements about its Trump coverage, said at a gala last month. "We don't have to look far for evidence of that."

Few presidents have affected the perception of journalism like this one. A Pew survey this month found that Americans' confidence in news coverage is closely correlated to their opinion of Mr. Trump. Forty percent of Republicans who strongly approve of the president's job performance said that journalists have "very low" ethical standards, versus only 5 percent of Democrats.

Mr. Trump has long oscillated between taunting, cajoling, criticizing, and manipulating the journalists who cover him. Asked by The Times in January about his views of the free press, Mr. Trump replied in contradictory ways, deeming the news media "important," "beautiful," "so bad," and "unfair."And when he was confronted by the publisher of The Times, A.G. Sulzberger, about a rise in threats against reporters since he took office, Mr. Trump declared, "I don't like that," before quickly returning to his grievances. "When you get really bad stories, where it's not true, then you sort of say, 'That's unfair.'"

To Joel Simon, executive director of the Committee to Protect Journalists, these rhetorical attacks have rippled outward. Globally, Mr. Simon said in an interview, at least 30 journalists were jailed in 2019 under charges of reporting false news in 2019.

"We view that as governments around the world taking advantage of the Trump 'fake news' framing and using that as a pretext of imprisoning journalists," Mr. Simon said. "The dissemination of that rhetoric has only increased in the last 12 months. It's having a very negative effect."Domestically, journalists in Washington say Mr. Trump's behavior this year has only deepened their unease.

Jonathan Karl, the president of the White House Correspondents' Association, cited the attempt by the administration to ban a journalist — Brian Karem of Playboy magazine — from the White House grounds. The episode mirrored an incident in 2018 where Trump aides revoked the credentials of a CNN correspondent, Jim Acosta, and falsely accused him of "placing his hands" on an intern. (Both journalists' passes were restored by the courts.)

For Mr. Karl, who reports for ABC News, the year's "most chilling moment" came when a video that depicted Mr. Trump as a mass murderer, shooting and stabbing members of the press, was screened at a retreat for the president's supporters at the Trump National Doral Miami resort."There are ominous signs," Mr. Karl said.

The violent video, concocted by right-wing provocateurs, was later disavowed by the White House. But the administration has presided over more subtle rebukes of the press.

The daily White House press briefing was once a ritual of Washington life and, viewed abroad, a potent symbol of accountability in government. In 2017, the Trump administration held about 100 formal briefings; in 2018, that number dropped by roughly half.

The first, on Jan. 28, began with a barbed greeting from the press secretary, Sarah Huckabee Sanders — "Missed you guys," she said dryly — and the second, on March 11, ended with shouted questions about Mr. Trump's involvement with payoffs to a pornographic film star who had alleged an extramarital affair. Ms. Sanders referred to outside counsel and cut the queries short.

"Thanks so much, guys," she said. No more questions.

In reality, Mr. Trump remained more directly accessible to journalists than several of his recent predecessors. He routinely fields questions during photo-ops and has made a habit of jousting with reporters on the South Lawn of the White House while the presidential helicopter whirs in the background.But the arrangement is stacked in Mr. Trump's favor. The noise lets him ignore questions he dislikes. And the events are entirely at Mr. Trump's discretion, as opposed to a regular briefing where officials must answer for the news of the day.

Ms. Sanders departed the White House in June, signing on as a commentator at Fox News. Her successor, Stephanie Grisham, has yet to hold a White House briefing. For the first five and a half months of her tenure, she granted interviews only to Fox News, Fox Business and the Sinclair Broadcast Group, a regional network that had required its affiliates to broadcast pro-Trump editorials. Ms. Grisham appeared on ABC and CBS for the first time in December, after Mr. Trump was impeached.

Fox News remained Mr. Trump's news venue of choice, despite the president's occasional carping about the channel's insufficient loyalty. Of Mr. Trump's roughly 70 interviews in 2019, 23 took place on Fox News, according to Mark Knoller, a CBS News reporter and the unofficial statistician of the White House press corps. (Fox Business interviewed Mr. Trump an additional four times.)Sean Hannity, the Fox News star, interviewed the president on seven occasions. ABC, CBS, and NBC each had one interview; CNN was shut out. The Times had one formal interview with Mr. Trump, and he spoke with The Post twice. Mr. Trump's bookings ranged widely, from C-Span to Telemundo to right-wing stalwarts like Breitbart News and The Daily Caller. He also spoke with Bill O'Reilly, the former Fox News host who was fired after numerous revelations of workplace harassment.

In the ratings, Fox News ended 2019 far ahead of its competition. Not only did the channel beat its cable rivals, MSNBC and CNN — it was also the highest-rated network on television outside of the traditional Big 4 broadcasters (ABC, CBS, NBC and Fox). Mr. Hannity's show drew an average of 3.3 million viewers a night, making it the No. 1 program in cable news.

Mr. Smith's abrupt exit in October shocked his colleagues and offered a glimpse at strains inside the network, where pro-Trump morning and evening programming often clashed with the sometimes critical reporting included as part of its daytime news coverage. The impeachment hearings underscored the divide, with anchors like Chris Wallace acknowledging the damaging testimony against Mr. Trump, even as Mr. Hannity dismissed the process as a "revolting charade."

Impeachment offered some answers to a question media executives are asking themselves as a new year begins: Will a news-saturated public continue to tune into the Trump Show?

There are early signs of news fatigue. Ratings for the televised impeachment hearings were solid, but they fell short of political spectacles like James B. Comey's testimony in 2017. Television audiences for the Democratic primary debates dwindled over the course of the year. Over all, cable news viewership was down slightly in 2019, despite all the political drama.At one point in 2019, even Mr. Trump suggested that he might tune out the news, too. After yet another perceived slight, he conspicuously canceled the White House subscriptions to The Post and The Times.

Like many Americans, though, the president could not bear to look away. Days later, he was back to complaining about the coverage in the papers that he had claimed he would not read.

Michael M. Grynbaum is a media correspondent covering the intersection of business, culture. and politics.@grynbaum This appeared in The New York Times, on December 30, 2091.

Voices4America Post Script. Of all the #Trump2019Roundups you may see, this highlights one of the greatest dangers he has done to our Republic- Attacking our press and Putting a Free Press/our Journalists in danger. #FreePress #TrumpEnemyofthePeople

Be sure to keep in mind what Trump’s pal Putin does to journalists. 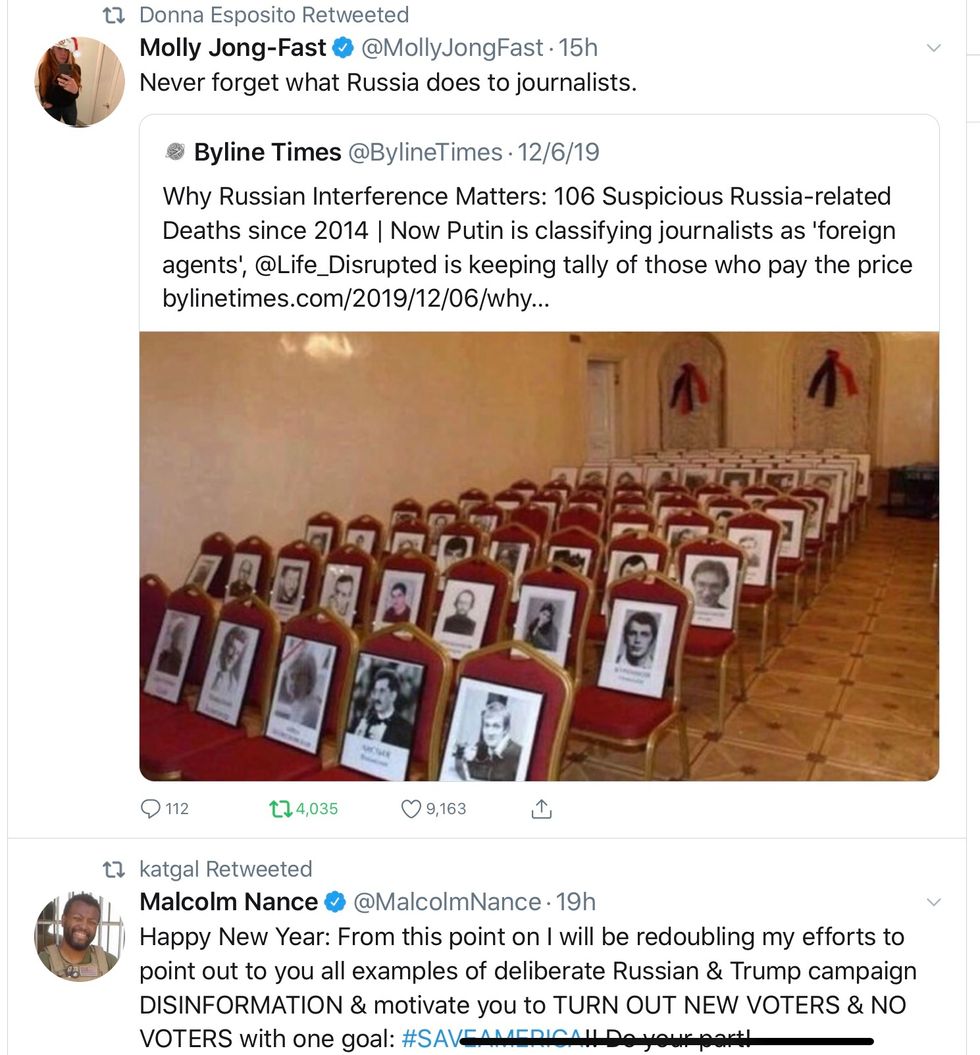 You may also want to read this. Donald Trump's War on Journalism | His attack on Amazon may be his most egregious abuse of power yet. https://itunes.apple.com/us/app/app-name/id5651263... 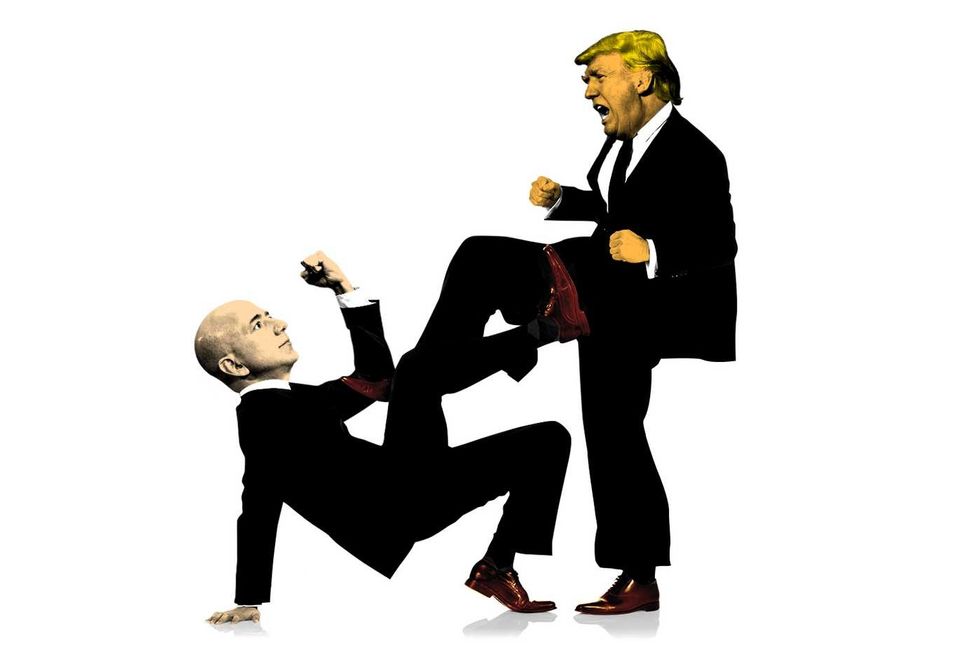