Today’s Senators Could Be Remembered for a Single Vote.

Today's Senators Could Be Remembered for a Single Vote

History suggests certain votes are indelible. For many members of the 1974 House, their Watergate stance was literally the headline of their obit.

As soon as tomorrow, the 100 members of the U.S. Senate will deliver a historic verdict in the impeachment trial of President Donald Trump. The news stories—and likely the senators themselves—have been focused on political risks to their seats and their party.

But there's also a more profound, personal consequence to their votes on the two articles of impeachment: How they will be remembered.

It might seem impossible to know how history will look back on a vote taken on one day in Washington in 2020. But in this case, there's a useful antecedent, which is how history looked back on the House members who weighed President Richard Nixon's fate in 1974. I studied the obituaries in major newspapers of every Republican member of the House Judiciary Committee who voted to support or oppose the articles of impeachment for Nixon in the summer of 1974. (The issue never came to a full House vote before Nixon's resignation later that summer.) 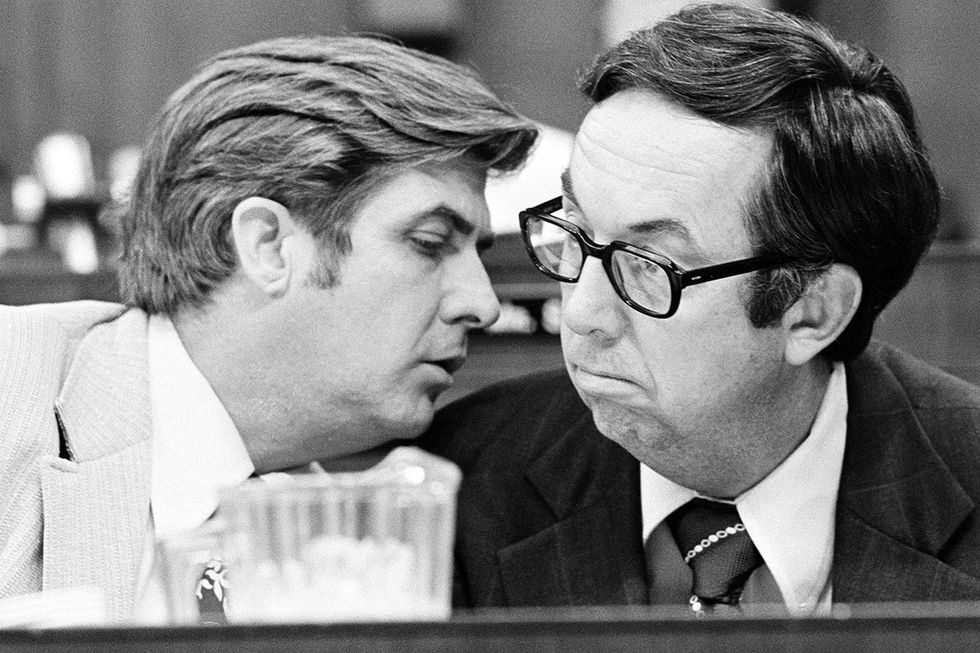 The results were striking. Regardless of whether the congressmen voted for or against the articles, their legacies were largely defined by this one moment. No matter what other choices they made in life or legislation they helped pass, that one decision shaped how they were remembered in their obits.

Whether fair or not, the headlines themselves reveal the mark on their legacies: "Thomas Railsback, Congressman Who Broke with GOP to Back Nixon Impeachment, Dies," the Associated Press reported. The newspaper reported nothing else about his 16 years in Congress, including his leadership on juvenile justice, election law reforms and legal aid protections. "Ex-Rep. Charles Sandman, Nixon Supporter, Dies," read the New York Times headline, choosing to elevate that one aspect of Sandman's life, despite his serving as a New Jersey Superior Court judge at the time of his death, and having been president of the state Senate and a prisoner of war in World War II.

The obituaries show us just how much a little moment in time can shape the public's memory of lawmakers' decision on impeachment.

It's possible to detect a couple of patterns. First, the obituaries show us that the writers love a Republican who breaks ranks. Maryland Representative Larry J. Hogan's obituary, for instance, says he "projected an image as a scrappy politician and conservative stalwart" who "possessed an independent streak, most visibly when he put his political future at risk by turning against a president from his own party during the Watergate scandal." The New York Times obituary for Representative M. Caldwell Butler of Virginia recalled the words of the columnist Mary McGrory, who called Butler's announcement that he would call for impeachment "the single most fiery and liberating sentence spoken" during Watergate.

For those who switched their position at some point in the Nixon proceedings, even after the committee vote, the obituaries give a starring role to these changes of heart. In California Representative Charles Wiggins' obit, the New York Times noted that the congressman abruptly reversed his support of Nixon when the news broke that the president had helped conceal the Watergate break-in. "Because of that, Mr. Wiggins said, he had reached the 'painful conclusion' that it was in the national interest for Nixon to resign," the obit reads. Representative Wiley Mayne of Iowa, too, is remembered principally for his pivot on the issue.

What else do the obituaries show us? Some of them are remarkably detailed about how one congressman or another responded to the pressures of the time. Butler's obituary tells the story of his mother's writing him that his future "will go down the drain if you do not stand with your party at this critical time." "Dear Mother," he replied, "You are probably right. However, I feel that my loyalty to the Republican Party does not relieve me of the obligation which I have." (Butler's mother was wrong in the end. He won reelection four more times.) We can guess the obituaries of the future will note that in 2020, mostly Republican senators voted in opposition to what the public wanted: For instance, by noting that 75 percent of all Americans in the most recent poll and 69 percent of Republicans in another want the impeachment trial to hear from witnesses.The obituaries also note how these votes affected their political futures. Support for Nixon, "and President Gerald R. Ford's subsequent pardon of Mr. Nixon, were widely regarded as responsible for Mr. Maraziti's defeat by Helen S. Meyner, a Democrat, in the 1974 election," reads the New York Times obituary for Representative Joseph Maraziti of New Jersey. The Orlando Sentinel obituary for Indiana Representative David Dennis starts off by describing him as "a former U.S. representative whose vote against impeaching President Nixon cost him his seat in Congress." It's possible these representatives read their cards wrong when weighing the costs of their vote in the 1970s—something that current senators might want to note.

The Nixon-era congressmen's obituaries also illustrate that even in death, people will still judge the senators' and congressmen's reasons for voting how they did. The Washington Post called Michigan Representative Edward Hutchinson's reasoning "a somewhat convoluted theory of constitutional law in defense of his president and party leader." In Sandman's obituary, the New York Times described the strategy he led: "to construe the evidence as narrowly as possible, require ironclad proof and propose benign explanations of information damaging to the President."

Another lesson from these obituaries is how the lawmakers' record on the vote can even reflect on their family members who stay in public service. On July 23, 1974, the first Republican to announce he would vote to impeach Nixon was no moderate. It was the staunch conservative Hogan, who made headlines for his act of courage. Hogan's obituary highlights the influence of this one act on the lives of his family including most notably one of his sons. "While Larry Hogan Jr. was running for the Maryland governor's office in 2014, he often cited his father's stance toward Nixon as an example of political courage," the Washington Post's obituary said. Governor Hogan said of his father, "He taught me more about integrity in one day than most men learn in a lifetime." That one day was the day of the impeachment vote.

Nixon, of course, ultimately resigned over disclosures that revealed much more about the issue at the center of his impeachment inquiry. For Trump, it is not clear if we will ever have such a smoking gun—or, if we've already had it, but in a very different era and media environment from the one in which Nixon was driven to resign. But it's likely that the distance of only a few years will give the public a different perspective on those who will vote for and against the articles of impeachment. These obituaries remind us of the possibilities.

Ryan Goodman is co-editor-in-chief of the national security online forum JustSecurity.org. He is New York University School of Law's Anne and Joel Ehrenkranz professor of law and previously served as special counsel to the general counsel of the Department of Defense. This appeared in Politico, January 30, 2020.

Voices4America Post Script. Today or tomorrow, the Republicans will acquit a guilty man. Then Trump will officially be OJ, acquitted but not exonerated. More evidence will come out. #TrumpIsGuilty #TheGOPBetraysAmerica