The Super Bowl is a Political Football.

I am not a football fan, but I had a broad smile when the Eagles won the Super Bowl.

On the other side, I assume -"There was no joy in the White House. Mighty Brady had struck out."

Yes, I know this was football, not baseball but you get the point.

In case you missed this, Trump has been running a war against the NFL for some time, even urging NFL owners to fire players who kneel for the national anthem before games. How can we ever forget Trump's oh so "Presidential" words of last September, "Wouldn't you love to see one of these NFL owners, when somebody disrespects our flag, to say, 'Get that son of a bitch off the field right now, out, he's fired. He's fired,'" Trump told a crowd gathered at a rally for the first of the losers (Luther Strange) that Trump backed in the 2017 Alabama race for Senator.

As we know, Trump cares more about Trump than about the success of American business. And so, with regard to the NFL, he has frequently declared victory, claiming that he single-handedly is responsible for NFL television ratings falling. According to him, former football fans follow his lead and are boycotting football.

Never mind that football, enmeshed as it is in controversies about concussions and the health of players, domestic abuse by players, and general matters related to game and player violence, has been losing the support of Americans way before Trump's rants.

Still, the self-proclaimed enemy of NFL players has made a team from a state where Hillary beat him by 27% in 2016 into his own personal avatar.

How did that happen?

One source of this seems to be Trump's claims of friendship with Tom Brady, the Patriots' star quarterback and with Robert Kraft, owner of the team.

Here is a picture of #JelloMan with Brady. Trump has said that he and Brady are friends. They did play golf and Trump had the young, impresssionable Brady judge a beauty contest for him. Yet, the friendship was not deep enough to compel Brady to join his 2017 championship teammates for their April visit to the White House. The day of the visit, Brady said he couldn't come, "for personal reasons.“ 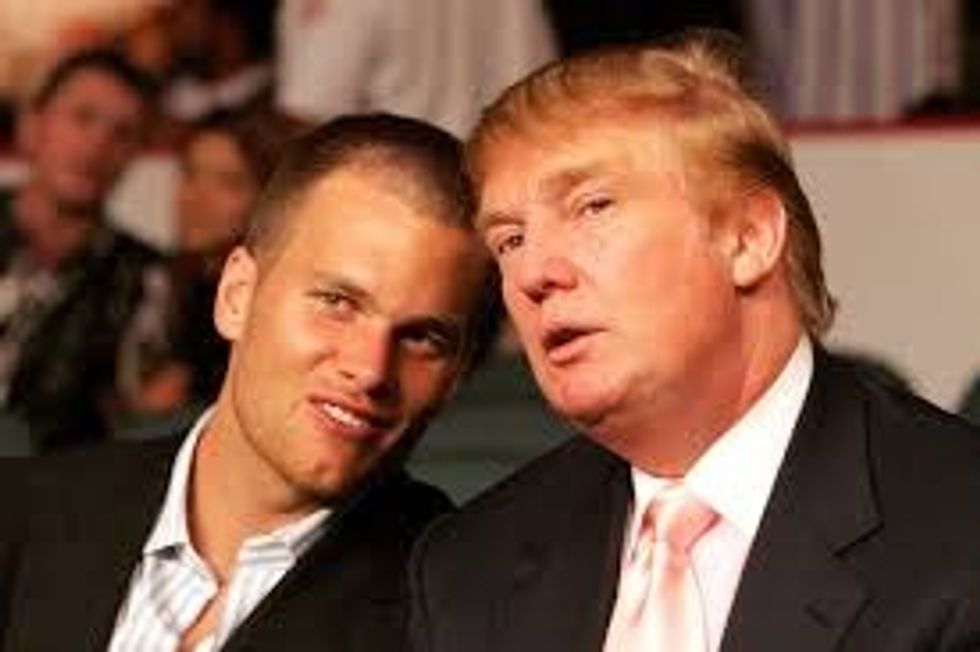 More recently, this past September, following Trump's 'Get that son of a bitch off the field right now, out, he's fired.' tirade, Brady spoke up on local Boston radio, "I certainly disagree with what he said. I thought it was just divisive."

As to Robert Kraft, despite being a life-long Democrat who donated to President Obama's two campaigns, he seems to have steadily supported Trump (as a payback for Trump's attention to him after Kraft's wife died.) The result was Kraft encouraged his 2017 Super Bowl winning team to visit with Trump and to present him with a coveted Super Bowl ring. Kraft also gave $1 million to Trump's inaugural committee. Recently, Trump claimed that Kraft called him to congratulate him on the 'awesome' Tax Bill. 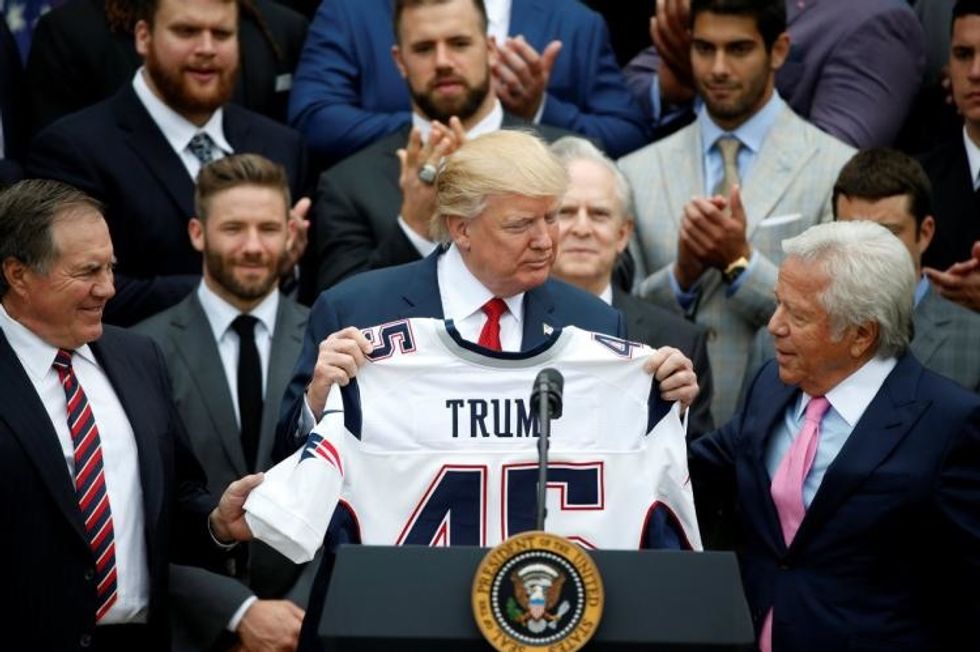 The most well-known of Trump's tweets about Brady, Kraft, the Patriots and their coach came after their Super Bowl 2017 victory when he extolled them using his most familiar term of praise, "winners." (This compares to his favorite term of disapprobation "losers" which he applies randomly to war heroes, political opponents, and so on.)

When Brady was accused of cheating, by winning games with deflated footballs, Trump weighed in too with a bizarre comparison, making clear, as only a true narcissist could, his own identification with Brady, as if they were both locked in a fight with Hillary. 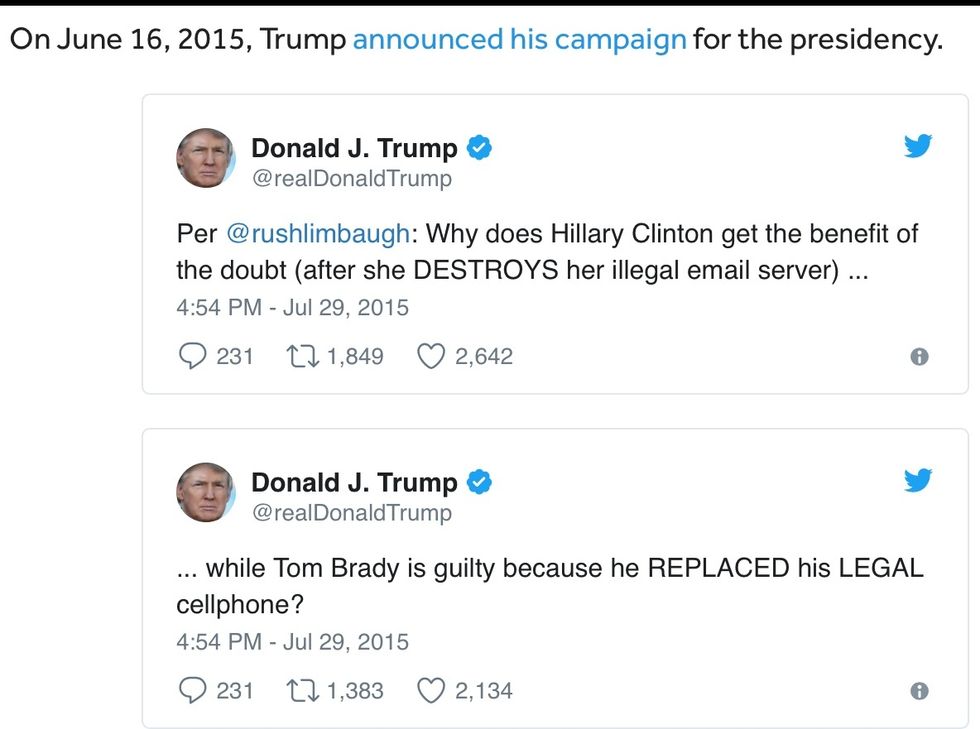 All through 2017, Breitbart News, the Daily Caller, conspiracy theorist Alex Jones and even white nationalist Richard Spencer were identifying Trump with the Patriots.

Before Super Bowl #52 began, Trump knew that this was a politicized game.

But he also knew he couldn't be sure he could embrace the Patriots and get the love returned. He hedged his bets.

But he still stepped right into the fray in advance of kickoff.

First, he refused to hold a pre-Super Bowl Press interview, as most recent Presidents including Bush and Obama, have (creating if not almost a tradition but an expectation). Was this because the game was broadcast on NBC? a subject of his incessant attacks on Press and Media?

Instead #DraftDodgerDonald, in a move calculated to grab attention to himself without the interview, released a statement claiming to honor the military but restating his opposition to NFL players who kneel during the national anthem.

"We owe these heroes the greatest respect for defending our liberty and our American way of life," Trump said in the statement he released. "Their sacrifice is stitched into each star and every stripe of our Star-Spangled Banner. We hold them in our hearts and thank them for our freedom as we proudly stand for the National Anthem."

Once again, Trump used the American military as a prop - this time to attack the brave and patriotic football players who kneel at football and other sports to object to racial police violence in America.

Lackey and collaborator Mike Pence even joined a Trump-induced NFL attack-stunt at an Indiana Colts game last October, walking out as patriotic players exercised their right to free speech.

This Super Bowl Sunday, Trump's designated lackey was Kellyanne Conway who picked up the ball, proclaiming "In my house and in many other households across this country we say 'you take a knee for the lord and you stand for the flag.'" Who better to fumble than Kellyanne, who it turns out is a life-long Eagles Fan who after the win try to recover her Trump credos by equating the winning Eagles with Donald Trump? Does this make you sick?

And then there were the BOTS. If you haven't taken in what Bots are, they are web robots – software applications that run automated scripts, enabling simple tasks to be repetitively undertaken.

The Super Bowl is fertile ground for them, as they can easily use Super Bowl related hashtags to draw peoples' attention to brands and products - and politics.

TheConversation.com reported (using data from Mentionmapp Analytics, a Twitter analysis tool) a preponderance of betting bots churning out automated messages promoting often extreme views from the Alt-Right during the game.

According to a Twitter report, issued in January, almost 700,000 Americans retweeted, liked or followed Twitter accounts belonging to Russian bots that spread misinformation and pro-Trump propaganda during the 2016 campaign — and the Russian generated cyber actions have continued well into Donald Trump's presidency. The Bots operate on behalf of the Internet Research Agency, a cyber organization linked to the Russian government.

These Russian bots ( as well as the Alt-Right bots) were active during Super Bowl 52.

The Internet was buzzing about their presence. Here is a sample.

Ronald Klain who was chief of staff for Al Gore and Joe Biden tweeted this.

Twitter, in my view, has a responsibility to sort out what happened and find the Bots and figure out how to shut them down.

As for regular Americans, they too knew this football game was a stand- in for a political fight.

Here are a sample of my favorite reactions to the Eagles' win. 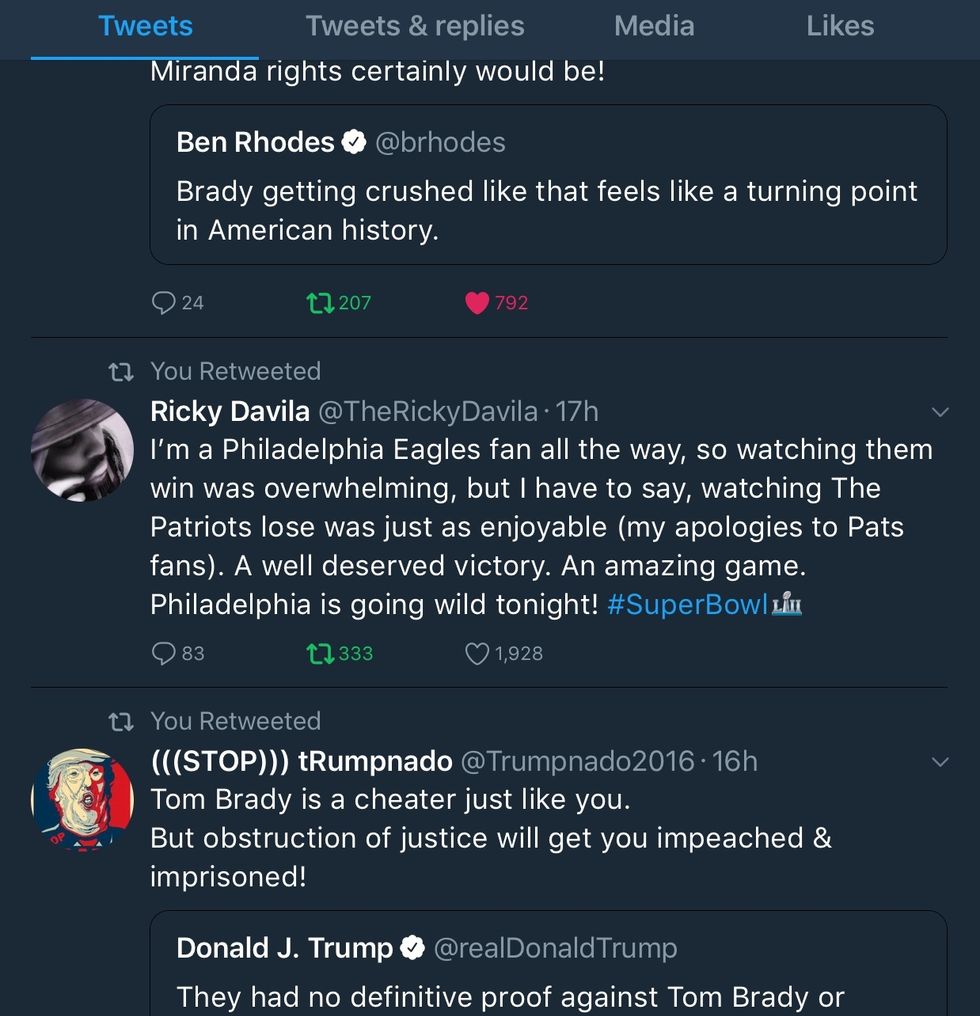 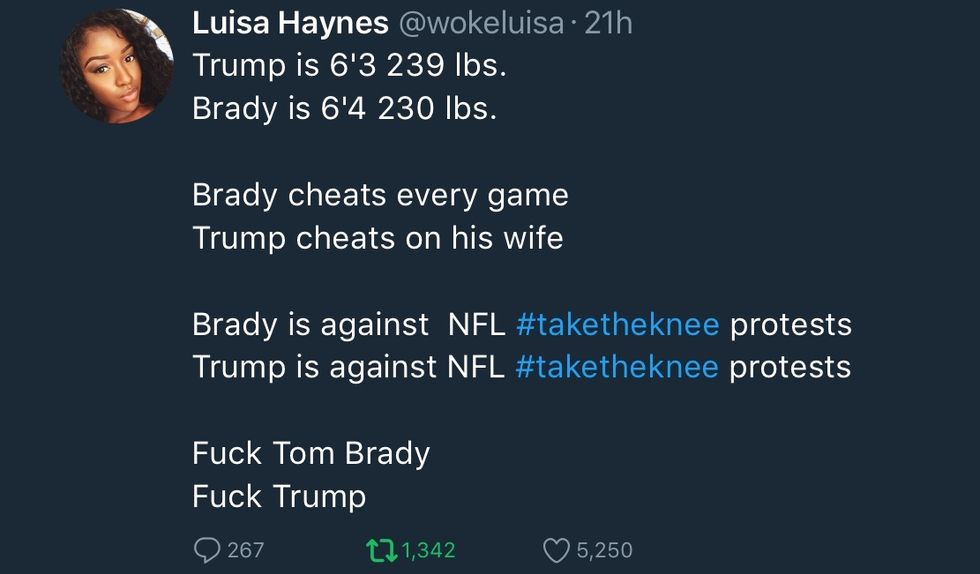 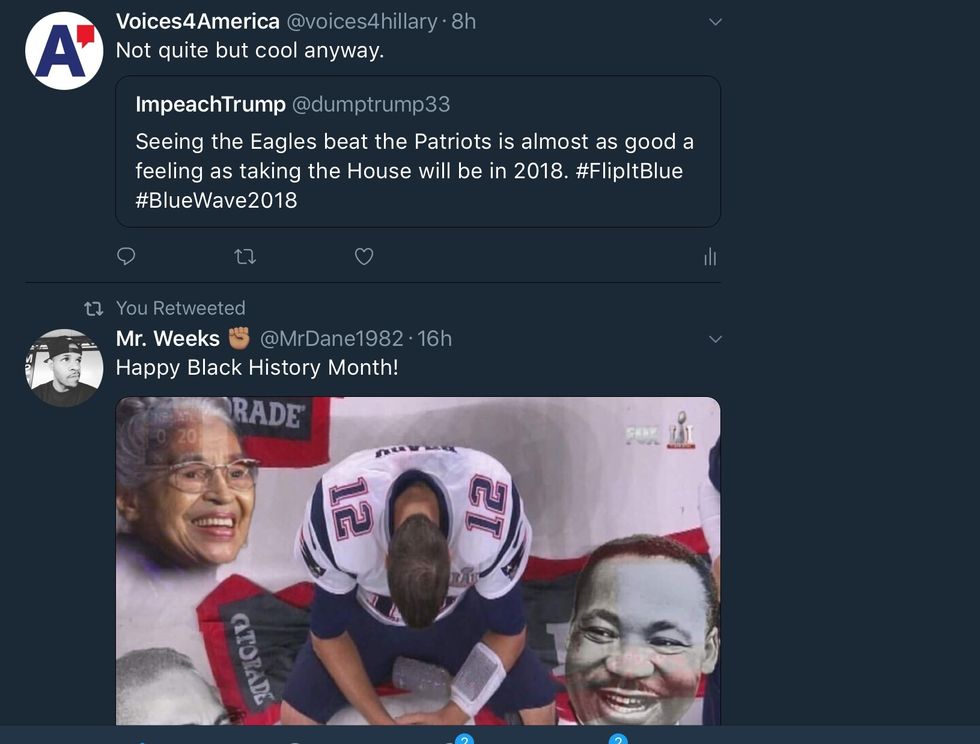 Well, what can we expect next?

There will be a dust-up of who will visit the White House and more insults and racism from its current occupant.

Several members of Super Bowl champion Philadelphia Eagles have already answered that hope and said they will not visit the White House if invited by Trump.

More Eagles will undoubtedly speak up.

As for Super Bowl 53, let us hope that by then, Team America will win, and this disgusting, divisive and damaging man will be out of the White House, left to send only invisible tweets into a cyberspace inferno where his friends, the bots, read them again and again for all eternity. 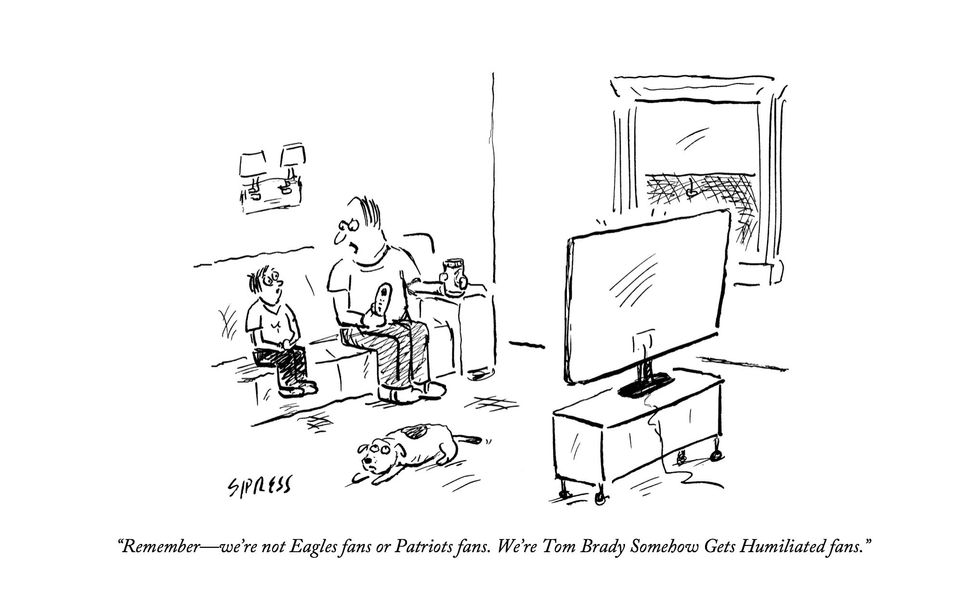