The false prophet in the White House.

On Tuesday, the president of the United States accused Jews of disloyalty and stupidity, a congresswoman of anti-Semitism, Democrats of planning to abolish the Second Amendment, and a former employee of "gross incompetence." He also suggested that Russia be readmitted into the G7 and cancelled a trip to Denmark because its prime minister wouldn't let him buy Greenland.

The day will go down in history as — to quote George Conway — "Tuesday."

The next morning, President Trump logged onto Twitter and attacked the prime minister of Denmark, attacked the chair of the Federal Reserve, attacked "The Fake News LameStream Media," attacked "the politically correct Automobile Companies," and thanked and quoted a guy comparing him to Jesus Christ. The guy is Wayne Allyn Root, a radio talk-show host and a self-described "Jew turned evangelical Christian." Trump quoted Root as saying: 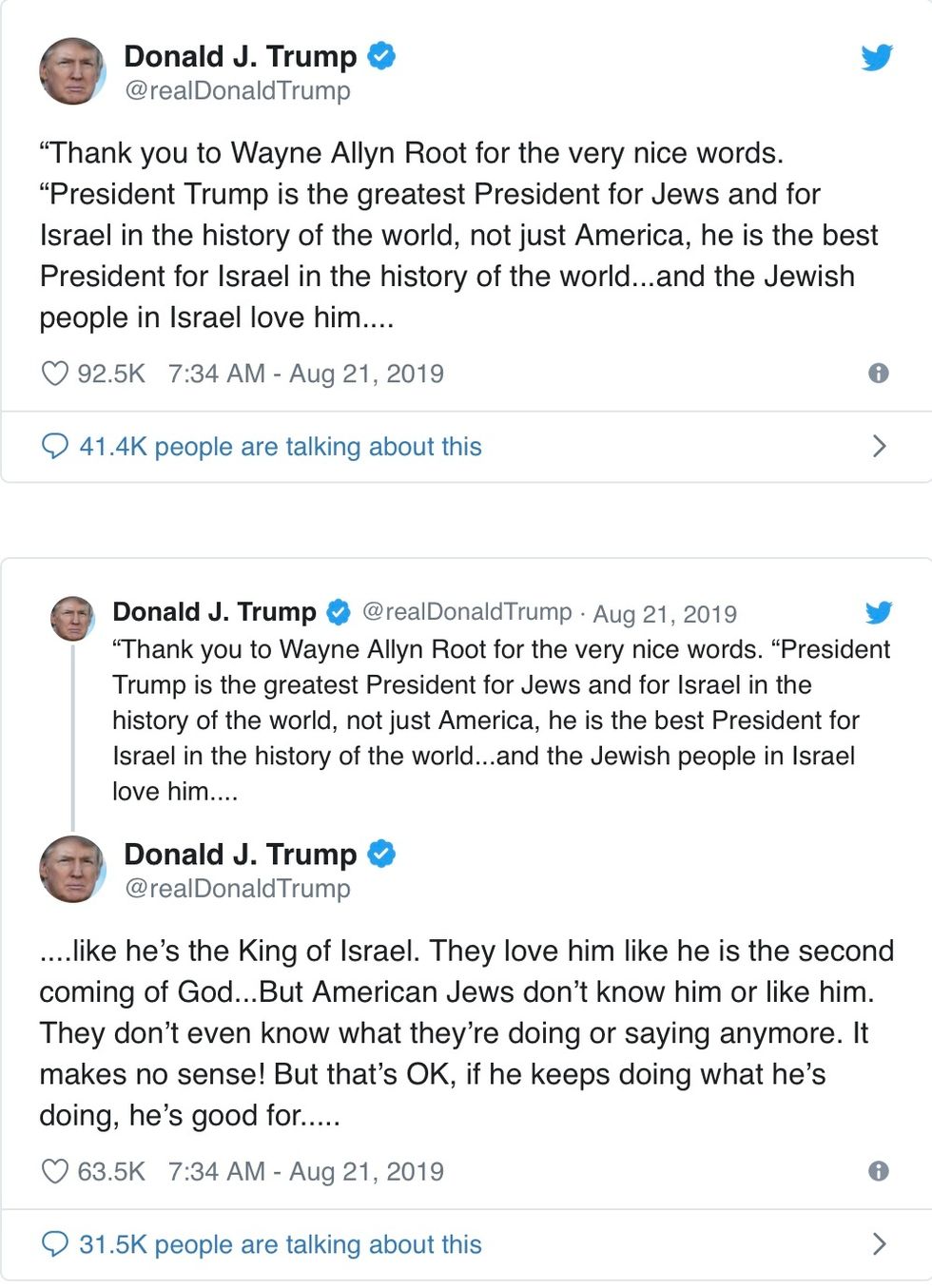 A couple of hours later, Trump referred to himself as "the chosen one." Many people are saying this. Trump is beloved, even worshipped, by people who love Jesus and abhor Mexicans named Jesús.

At CPAC in February, Mike Lindell, the Jesus-loving CEO of My Pillow, said, "I see the greatest president in history. Of course he is. He was chosen by God."

Last year, Candace Owens tweeted: "I truly believe that @realDonaldTrump isn't just the leader of the free world, but the savior of it as well."

In April, Trump's campaign manager, Brad Parscale, tweeted: "Only God could deliver such a savior to our nation." That same month, former congresswoman Michele Bachman said, "We will, in all likelihood, never see a more godly, biblical president again in our lifetimes."

Judging by the way things are going, we may never see another president again in our lifetimes. In 2016, Sen. Ted Cruz (R-Tex.) presciently warned, "We're liable to wake up one morning and Donald, if he were president, would have nuked Denmark."

Now, three years later, Trump has the power to nuke Denmark, and he is eliciting comparisons to Jesus Christ. In a sense, the comparison is apt. Like Jesus, Trump has never read the New Testament. From the Book of Revelation: "The beast was given a mouth uttering haughty and blasphemous words, and it was allowed to exercise authority for 42 months." For those keeping track, 42 months is six months shy of a full presidential term.

Trump's supporters compare him to Jesus when they should compare him to L. Ron Hubbard, a malignant narcissist and the founder of the Church of Scientology who, like Trump, allegedly didn't pay his taxes. But even this comparison is inexact. Hubbard, a prolific science-fiction writer, started a religion by design, supposedly as a way to get rich, whereas Trump became a cult leader haphazardly, when he ran for president and accidentally won. Trump's previous experience consisted of multiple failures, in business and in marriage, but he managed to con a party and then a nation into electing him. "Failure in the management of practical affairs seems to be a qualification for success in the management of public affairs," Eric Hoffer wrote in The True Believer.

Belief often requires a multitude of unbeliefs. If you believe Trump, you cannot believe anyone else. Trump put this explicitly last year when he admonished his followers, "Just stick with us. Don't believe the crap you see from these people — the fake news ... Just remember: What you're seeing and what you're reading is not what's happening."People believe Trump because they want to be deceived. In her book The Confidence Game: The Psychology of the Con and Why We Fall for It Every Time, Maria Konnikova writes, "The true con artist doesn't force us to do anything; he makes us complicit in our own undoing. He doesn't steal. We give. He doesn't have to threaten us. We supply the story ourselves. We believe because we want to, not because anyone made us."

An evangelical told me that God put Trump in the White House "for a reason." Maybe the reason is to teach us a lesson: Don't ever do this again.

Voices4America Post Script. Favorite Sentence - "An evangelical told me that God put Trump in the White House "for a reason." Maybe the reason is to teach us a lesson: Don't ever do this again." It's important to know this. Share this. #TrumpCult #BlueVictory2020