AUSTIN -- Lt. Gov. Dan Patrick said Monday the country should go back to work in the face of the coronavirus pandemic. And the Republican suggested "grandparents" such as he -- at higher risk of contracting severe cases of COVID-19 -- should sacrifice to keep the country out of economic trouble.

"My message is that let's get back to work. Let's get back to living. Let's be smart about it," Patrick told Fox News host Tucker Carlson. "And those of us who are 70 plus, we'll take care of ourselves. But don't sacrifice the country."

The message echoed remarks by President Donald Trump on Monday. Trump said he wants to reopen the country for business in weeks, not months -- as he claimed, without evidence, that continued closures could result in more deaths than the pandemic itself.

The idea that the only option is for us to sacrifice ourselves is really incredulous to me," said Howard, who added she too is a grandparent. "I mean, there are definitely other routes we can take that make much more sense." 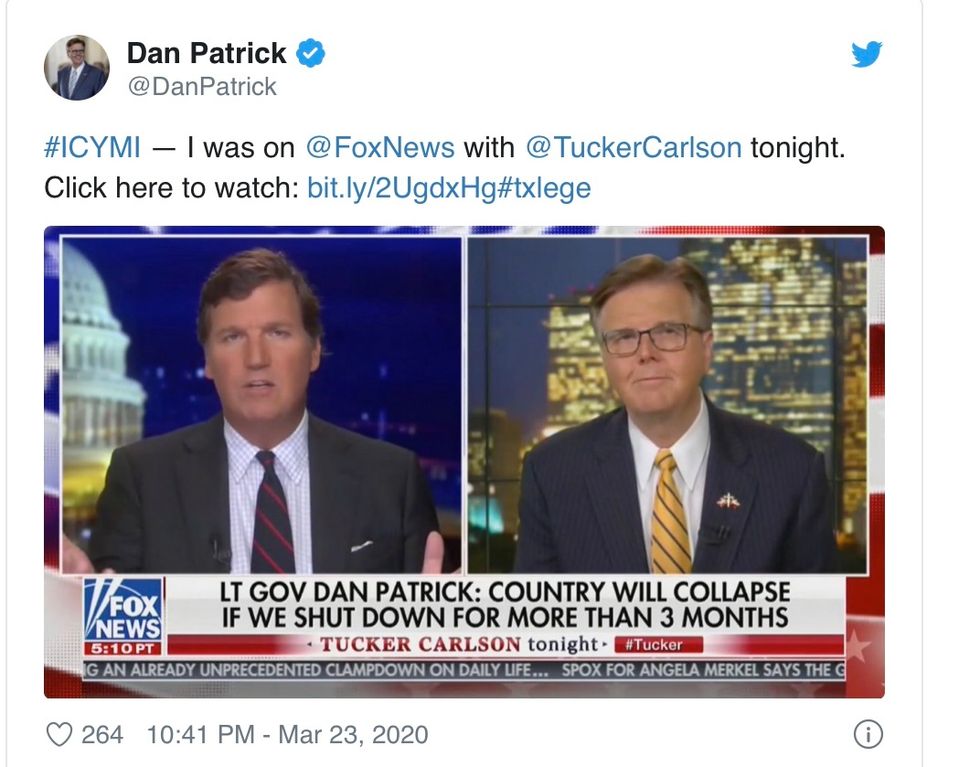 Patrick, who presides over the GOP-controlled Senate, made his comments as more counties are ordering residents to shelter in place, a dramatic step meant to stop the spread of COVID-19, which has already sickened at least 750 Texans, according to tracking from The Dallas Morning News. Dallas County on Sunday ordered residents to stay in their homes except for essential work and errands.

Several Dallas-area hospitals over the weekend called on Gov. Greg Abbott to issued a statewide shelter in place, a move Abbott resisted, saying it was premature. Over the weekend, Abbott put in place an executive order that closes schools, restaurant dining rooms, bars and gyms for the next two weeks.

Still, the Texas Hospital Association on Monday urged all communities statewide to order residents to stay at home in an effort to stop the spread of novel coronavirus and avoid a surge of patients who could overwhelm medical centers. The association also requested Abbott be prepared to implement a statewide shelter-in-place order "as the situation becomes necessary," according to a letter sent Monday by association president and CEO Ted Shaw.

Patrick said he trusts Trump's judgment and questioned whether the country should shut down in the face of the virus, which is highly contagious. "We have to have a time certain, we can't say in three months, or six months or 12 months," he said. "These businesses can't wait that long." 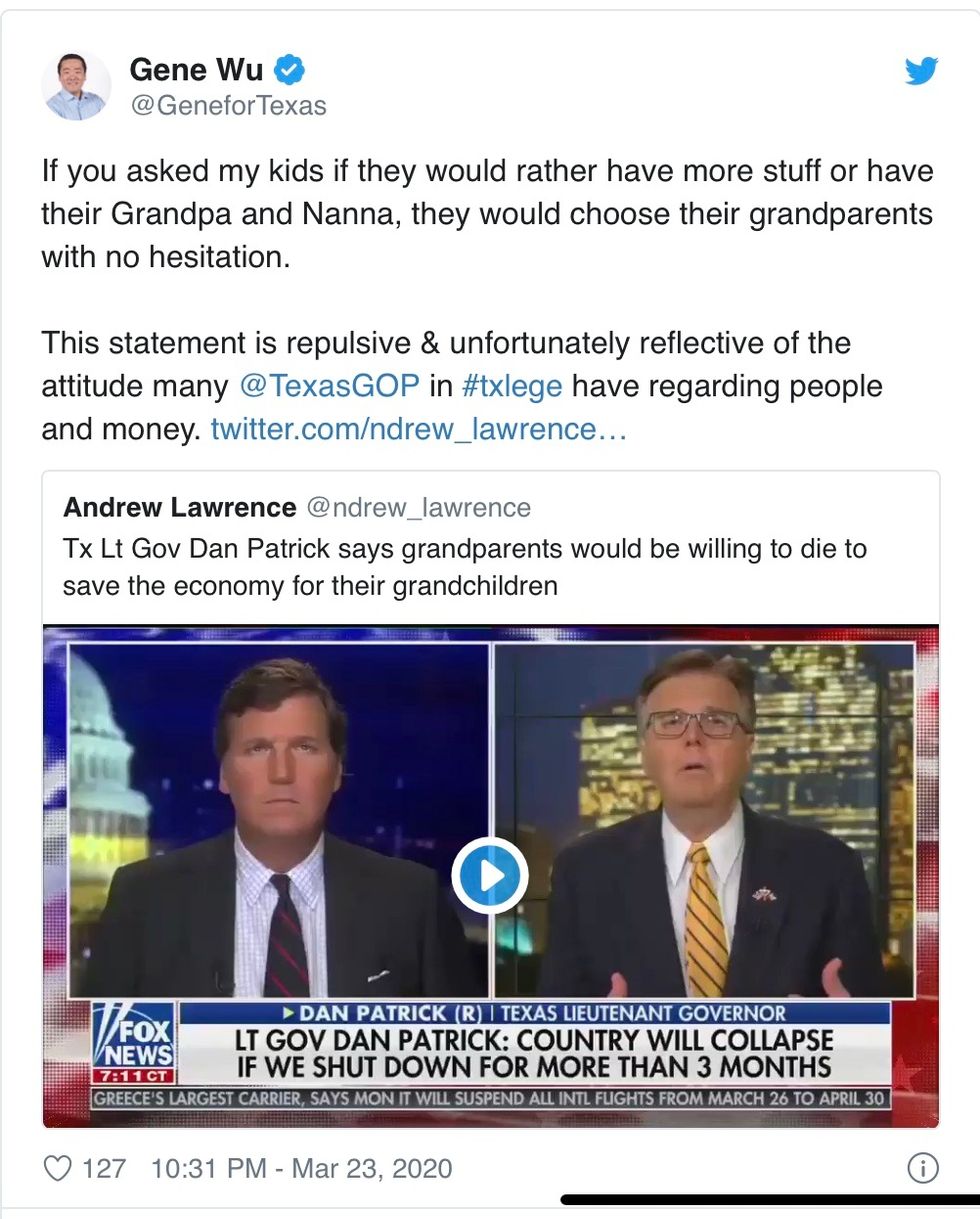 Patrick, who turns 70 next month, also told Carlson he is not living in fear of the virus, but is working from home and only travels when he needs to.

“No one reached out to me and said, 'as a senior citizen, are you willing to take a chance on your survival in exchange for keeping the America that all America loves for your children and grandchildren?'" said Patrick, who has six grandchildren. "And if that's the exchange, I'm all in. That doesn't make me noble or brave or anything like that. I just think there are lots of grandparents out there in this country like me."

"I want to live smart and see through this, but I don't want the whole country to be sacrificed," he said.

A spokeswoman for Patrick said he backs Abbott's executive orders, which all have "contained end-dates for re-evaluation." Abbott's office did not respond to a request for comment Monday night.

This story includes material from the Associated Press.

Here is some commentary from Twitterdom. 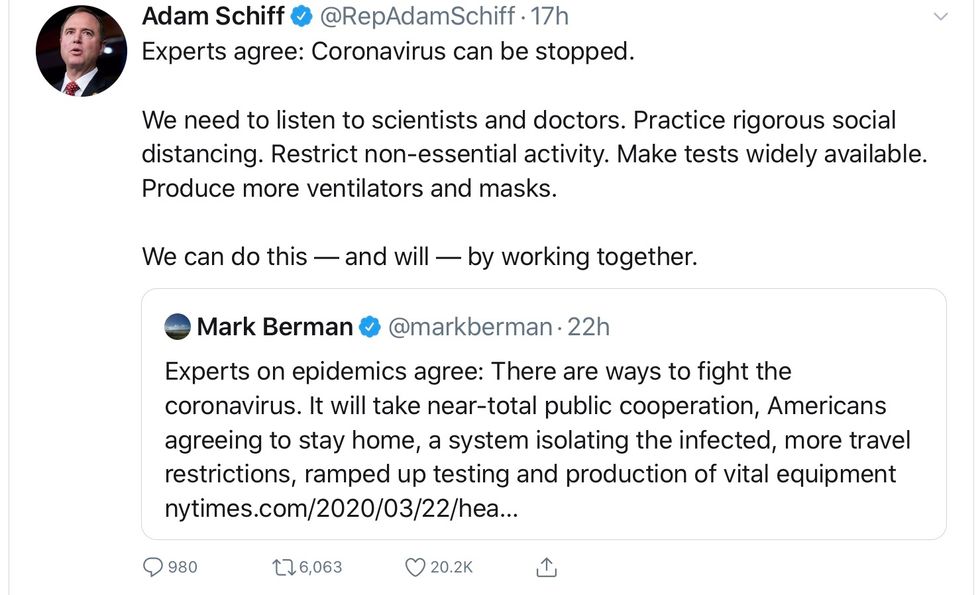 Which countries will be back soonest after the Pandemic?

Video. Speaker Pelosi on the bill and Trump shenanigans to avoid Oversight.

Mnuchin is asking for $500 billion that he can direct at his sole discretion to troubled corporations, including Trump's own. https://t.co/tgTGMLxMJn

Feel so bad for you. How horrible this is. https://t.co/ICQaFkzwVh

Feel so bad for you. How horrible this is. https://t.co/ICQaFkzwVh

My dad died two days ago from COVID19. He died alone because the hospital restricted all visitors in order to contain the outbreak. My deepest regret was not saying bye to him when I brought him to the hospital. I thought it was going to be a “Take care, see you back home.” 1/3

I am not sure Trump notices that Fauci contradicts him. Tump can’t follow the science. #TrumpIsAMoron https://t.co/FQPSVEUGeh

Our hospitals are out of gloves, masks, gowns, respirators, protective shoe coverings, and basic supplies! What the hell more is Trump waiting for? Hey stupid, this is the worst case scenario!