Annette Niemtzow
Yesterday was the day of the State of the Union. The formal basis for the State of the Union Address is the U.S. Constitution: The President "shall from time to time give to the Congress Information of the State of the Union, and recommend to their Consideration such measures as he shall judge necessary and expedient." Article II, Section 3, Clause 1.
This year, SOTU, as it is familiarly called, was delayed because of the 35 day Government Shutdown created by the criminal occupant of the White House.

The day did not begin promisingly. The New York Times reported, "But at a private lunch for television anchors earlier in the day, he offered searing assessments of a host of Democrats.

Mr. Trump dismissed former Vice President Joseph R. Biden Jr. as "dumb," called Senator Chuck Schumer of New York a "nasty son of a bitch" and mocked Gov. Ralph Northam of Virginia, who he said "choked like a dog" at a news conference where he tried to explain a racist yearbook photo, according to multiple people in the room."

The first question I have about this report was not Trump's not unexpected distasteful and disrespectful commentaries on Democrats - if he was polite, I would be shocked - but “a private luncheon for television anchors"? Why was that? Who was there? Is there any precedent for a luncheon that can easily be seen as a White House trying to manipulate the news?

But never mind. For now, until either We the People kick him out of office, or he resigns, this is a Trumpian world, and we all suffer from his attacks on Democracy and the Press. Sometimes those come in a single wrapper.

But I don't want to dwell on Trump's behavior or his bizarre State of the Union lies.

We can mourn the absence of a real Presidency in our nation - replaced, as it is, by a Massive Black Hole.

This is how Alok Jha (Guardian commentator) describes a Black Hole:

“Black Holes begin as giant stars (at least six times the mass of our Sun) and, after billions of years they collapse in on themselves into a point smaller than the full-stop at the end of this sentence. Nothing nearby can escape the pull of the resulting gravity.

Even at some distance outside the edge, it would take all the effort in the universe to resist getting pulled into orbit around the hole. Closer still, because of the sharp rate of increase of the forces, if your head was nearer the hole than your feet, the atoms in your hair would feel a stronger force than those in your toes. This difference would quickly tear you apart, turning you into a spaghetti-like line of atoms.

But a black hole would not need to suck the Earth in to cause us trouble. If one wandered within a billion miles of our solar system, its gravity could knock the Earth into a dangerous elliptical path around the Sun..."

Our country remains in trouble.

But last night showed a path forward, and there were 3 highlights:

As ever the Speaker used her power well.

Here she is, mocking Trump right to his face and he doesn't feel a thing.

She even had a chance to do some paperwork during his endless and often mendacious (I would write full of lies but I feel I should be relatively polite) ramble. 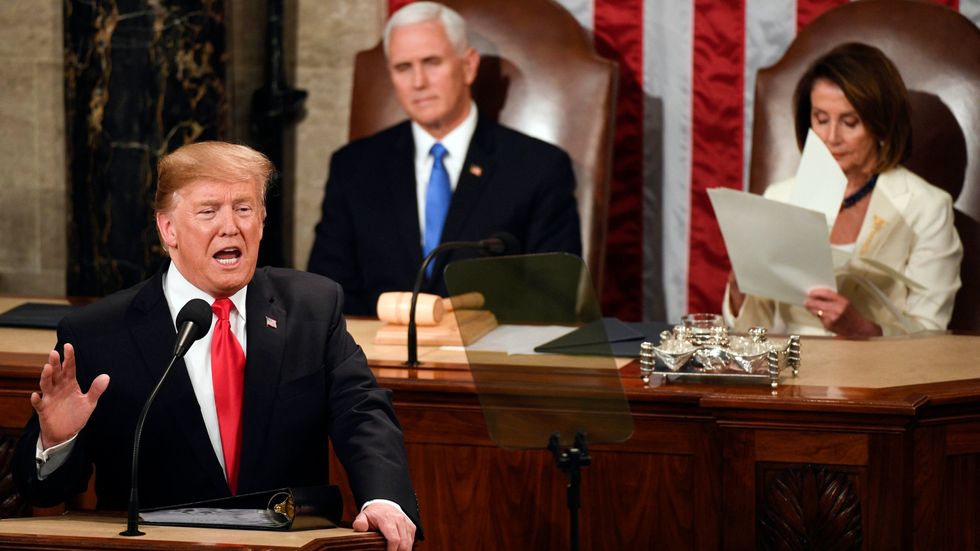 Nancy Pelosi catches up on some reading during Trump's SOTU.

As Alexandra Pelosi, Speaker Pelosi's daughter wrote of her style, Nancy Pelosi will 'cut your head off and you won't even know you're bleeding,'

I wouldn't be surprised if they gave him a red tie to hide the blood. (Did I say it was appropriately crooked to match its wearer's character? How's this for retribution - #CrookedDonald #LockHimUp ).

Here is a Washington Post summary of the media grabbing tribute by Democratic House Women:

The white outfits dozens of female lawmakers wore to the State of the Union address Tuesday night were a visual tribute to the U.S. suffragists and an attempt to spark the same kind of publicity, said Rebecca Boggs Roberts, the author of "Suffragists in Washington, D.C.: The 1913 Parade and the Fight for the Vote."

Hours before the speech, Democratic women were already posing in the Capitol in their white suits and dresses. "This afternoon, ahead of the #SOTU," Rep. Sheila Jackson (D-Texas) tweeted, "I was honored to stand alongside some of the 106 women of the #116 Congress in #suffragette white @HouseDemWomen."

Here are the proud Democratic Congresswomen, many of whom ran in 2018 because of Trump.

Last night they were at the SOTU cheering for themselves and for our nation.

Trump surprised by response from women in white during State of the Union address www.youtube.com

Frank Bruni of the New York Times described the scene in the Congress well:

...there was the shout-out to women in the workforce. During it, female House members stood, and some pumped their fists in the air. He registered surprise at first, followed by satisfaction, as he seemed to realize that their moment could also be his moment; that he could, for this one instant, hallucinate mutual respect and pantomime common cause; that he could just slough off all his sins and latch on to a spurious grace.

"Don't sit yet," he told them when he feared that they would end their celebration too soon, before his next great pronouncement. "You're going to like this."

Even the newly, briefly, falsely sensitive version of Trump couldn't lose his bossy streak — or stop hungering for, and predicting, the next round of applause."

As you probably know, Stacey Abrams, who was cheated from being the Governor of Georgia by GOP dirty tricks, delivered the Democratic answer to the Trump SOTU. And did she ever.

Stacey knocked it out of the park.

But It is only appropriate that Speaker Pelosi have the Last Word evermore, especially on this evening. 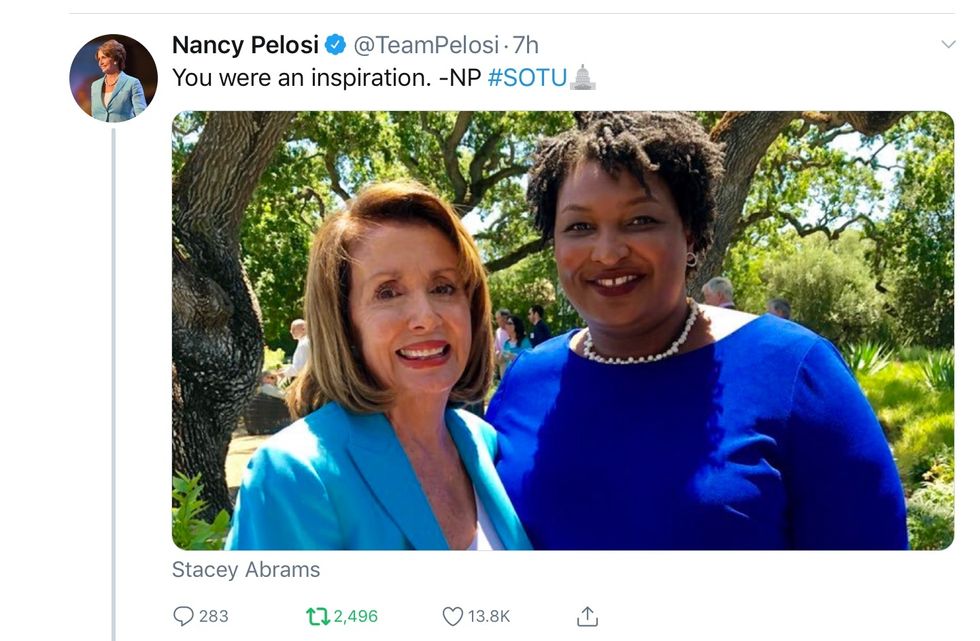 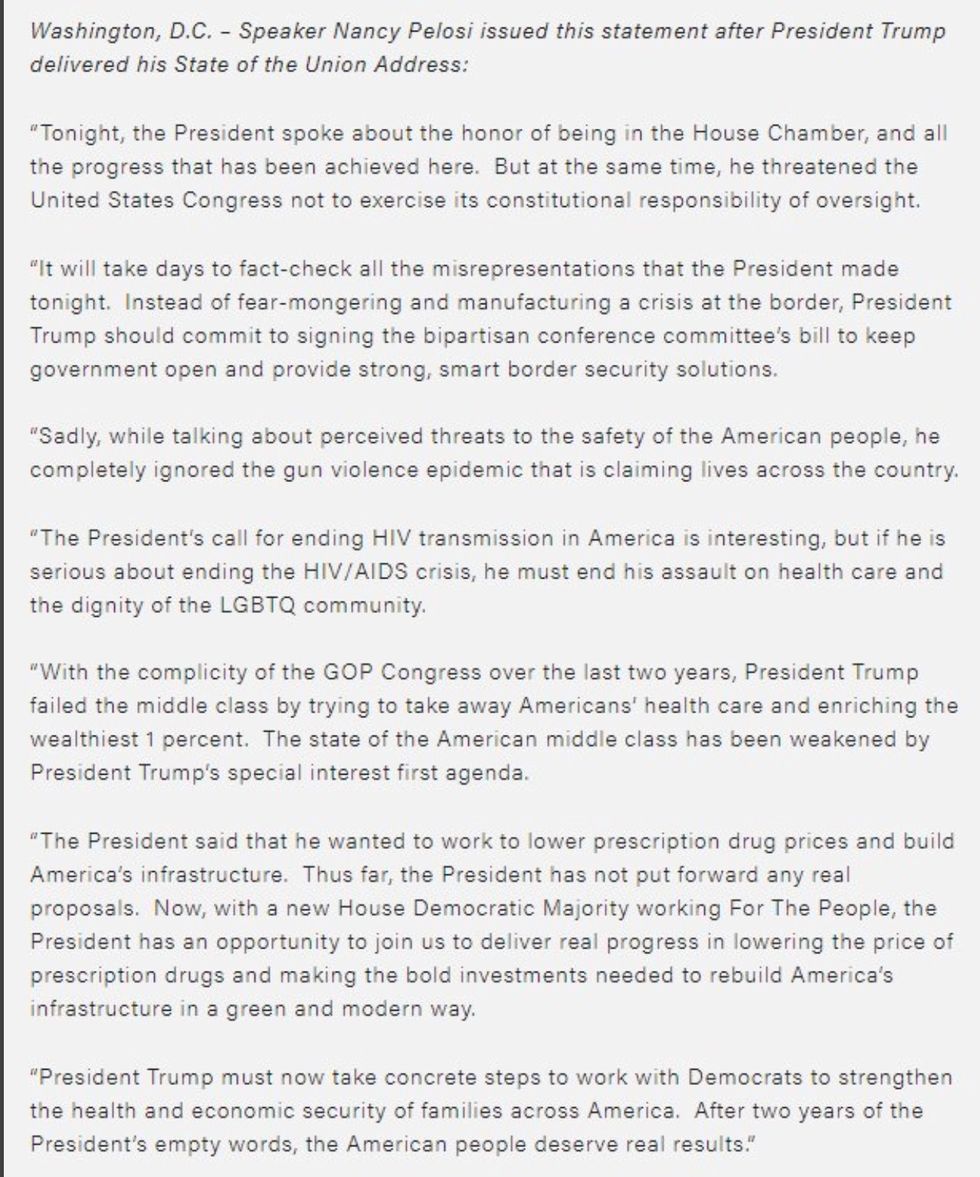 2. Presidential candidate Senator Kamala Harris's topline reaction to Trump's SOTU. Earlier, during the speech, she hook her head at his lies.

Trump and his Trumpers- bullies, belittlers. Then they met Greta. She is our present and our future. #Climate https://t.co/Vt4f6LzP42