Republicans acquitted Trump again, but this time is different.

(CNN) Former President Donald Trump's second acquittal by the US Senate proved the enduring power he holds over the Republican Party, with the results Saturday setting the dangerous precedent that even an autocratic leader who violates his oath of office can escape punishment if he bullies enough senators into standing by him.

His win came after a feeble defense by his lawyers that amounted to little more than gaslighting and a presentation of falsehoods. And it showed the fundamental power imbalance that is part of Trump's legacy in Washington. For four years, he abused the office of the presidency without impunity and made the founders' insistence on co-equal branches of government look like a farce.But Trump will also go down in history as a disgraced figure who escaped conviction on a technicality after a trial that undeniably proved that he endangered his own vice president, lawmakers in both parties, and scores of police officers as he sought to overturn the election results.

Seven Republicans joined 50 Democrats to convict him -- falling short of the 67 guilty votes needed -- but that was still six more senators than voted to convict him in 2020. Ten House Republicans voted to impeach him in January, including Washington Rep. Jaime Herrera Beutler, who was prepared to testify against Trump when managers initially said Saturday they'd call for witnesses after CNN on Friday night revealed new details of a heated phone call between Trump and House Minority Leader Kevin McCarthy during the insurrection.

Many Republican senators were clearly shaken by the voluminous video evidence presented by Democratic House impeachment managers last week that showed how the former President spooled lies about the November election to his followers for months, then inflamed the anger of a mob to the point where they stormed the Capitol on January 6, violently beating police officers as they claimed to be carrying out Trump's instructions to stop the certification of the electoral votes. And unlike Trump's first impeachment trial, when he could claim that he'd been vindicated, few GOP senators rushed to defend him on Saturday. Clearly still afraid of the electoral consequences they would face if they crossed the former President, many pinned their votes on the weak procedural argument that they lacked authority to convict under the Constitution since Trump has already left office. (The vast majority of constitutional scholars disagreed with that premise and the Senate had already voted earlier in the week that the trial was constitutional).

Trump played the victim, as usual, in his statement after the vote, claiming the impeachment trial was "yet another phase of the greatest witch hunt in the history of our Country" and that "no president has ever gone through anything like it."

But Senate Minority Leader Mitch McConnell -- clearly looking to somehow wrest his party from Trump's control despite the fact that polls show Trump still enjoys the support of a majority of Republicans -- essentially affirmed the House impeachment managers' case in a remarkable speech Saturday that was panned as the epitome of hypocrisy given that the Kentucky Republican had just voted to acquit Trump. Signaling the tonal shift occurring in some corners of the Republican Party, McConnell said Trump could face criminal prosecution for the events surrounding January 6 and stated that he was "practically and morally responsible" for provoking the violence. (He claimed the Senate was "not invited to act as the nation's overarching moral tribunal.") Sen. John Thune, the No. 2 Senate Republican, told CNN's Ted Barrett that he voted to acquit Trump because it was a "jurisdictional issue" and called it "an uncomfortable vote."

"I don't think there was a good outcome for anybody," the South Dakota Republican said.

McConnell hasn't been out leading the charge against Trump's election lies. He waited until mid-December to recognize Joe Biden as President. But on Saturday, he said the events of January 6 were a "foreseeable consequence of the growing crescendo of false statements, conspiracy theories and reckless hyperbole which the defeated president kept shouting into the largest megaphone on planet earth."Biden cited McConnell's speech in a statement Saturday night, playing up the bipartisan nature of the vote -- adding that while it did not lead to a conviction, the substance of the charge against Trump "is not in dispute."

"Each of us has a duty and responsibility as Americans, and especially as leaders, to defend the truth and to defeat the lies," Biden said. "That is how we end this uncivil war and heal the very soul of our nation."Nikki Haley, Trump's former ambassador to the United Nations and a potential contender for the GOP presidential nomination in 2024, made a similar argument as McConnell in an interview with Politico Magazine published last week where she said the party needed to acknowledge that Trump let them down. "He went down a path he shouldn't have, and we shouldn't have followed him, and we shouldn't have listened to him. And we can't let that ever happen again," the former South Carolina governor said in that interview.In his speech Saturday, McConnell said "it was obvious that only President Trump could end this," referring to the January 6 violence. But he noted that Trump failed to do so despite entreaties from former aides and allies, including McCarthy, whose expletive-laced phone call with the former President raised new questions about what Trump knew and when."The President did not act swiftly. He did not do his job," McConnell said. "Even after it was clear to any reasonable observer that Vice President (Mike) Pence was in serious danger, even as the mob carrying Trump banners was beating cops and breaching perimeters... the President sent a further tweet attacking his own vice president." Pence, another potential contender for the GOP nomination in 2024, has stayed notably silent since the insurrection -- choosing not to openly criticize Trump, but also choosing not to offer Trump political cover as it became clear that the way Trump endangered his vice president on that day was one of the issues that weighed most heavily on GOP senators during the trial. 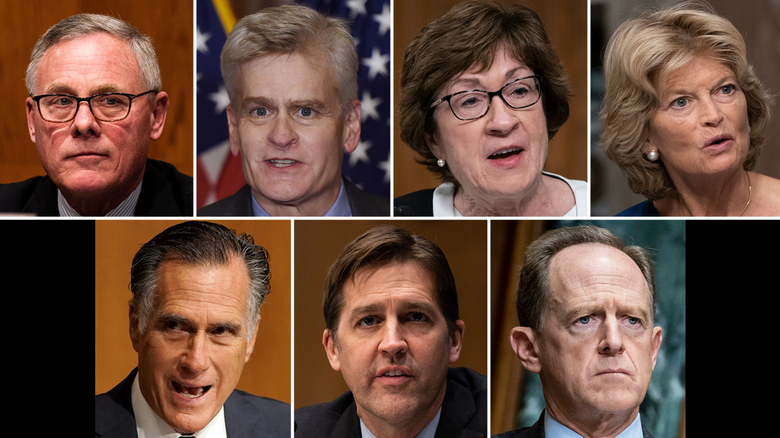 These Republicans voted to convict Trump in his second impeachment trial

As Republicans try to sort out what their future looks like now that Trump is no longer in office, the reality is that the former President may still wield tremendous influence in 2022 and 2024, not only because of his grassroots fundraising prowess and cultish following, but because the most conservative, and sometimes the most extreme voters, are often the most reliable in Republican primary contests.

His advisers expect him to return to the campaign trail to hold some of the big rallies that he adores, and he has not ruled out a run in 2024. Some GOP lawmakers had entertained the notion that Congress could censure Trump, but House Speaker Nancy Pelosi rejected that course of action on Saturday as an avenue that would let "cowardly" senators "off the hook."

"These cowardly Senators who couldn't face up to what the President did and what was at stake for our country are now going to have a chance to give (Trump) a slap on the wrist?" Pelosi said when asked about censure during a news conference with impeachment managers after the vote. "We censure people for using stationery for the wrong purpose. We don't censure people for inciting insurrection that kills people in the Capitol."

While Trump may not face any punishment in the halls of Congress, some of the GOP senators who voted to convict him are already facing the blowback back home -- as have GOP members of the House who voted to impeach him -- particularly at the local levels of the Republican Party where Trump loyalists still reign.

Sen. Bill Cassidy, who surprised with his vote that the trial was constitutional earlier in the week, was immediately sanctioned by the Louisiana GOP Saturday for his conviction vote. But the GOP senator, who just won reelection in November and won't face voters for another six years, was blunt in his statement explaining why he favored acquittal: "Our Constitution and our country is more important than any one person. I voted to convict President Trump because he is guilty," he said. The most surprising vote for impeachment came from North Carolina Sen. Richard Burr, who long ago announced he was not seeking reelection in 2022.

Among the others who voted to convict were Sens. Pat Toomey of Pennsylvania, who isn't running for reelection either, Mitt Romney of Utah, Ben Sasse of Nebraska, Susan Collins of Maine and Lisa Murkowski of Alaska.Of the seven, only Murkowski is up for reelection next year. The GOP senator, who has overcome primary defeats before and doesn't hesitate to buck GOP leadership, told CNN's Ryan Nobles Saturday that she understood the potential consequences of voting to convict the former President. "It's not about me and my life, my job," Murkowski said. "This is really about what we stand for. And if I can't say what I believe that our president should stand for, then why should I ask Alaskans to?"

And Sasse, who has been reprimanded repeatedly for criticizing Trump by party officials in his state, unapologetically warned of the costs of allowing Trump to emerge unscathed, calling "tribalism a hell of a drug" as he explained his vote. He noted that Trump tried to intimidate the Georgia secretary of state to "find votes" that would shift the state in his favor after the election, and argued that Trump's lies about the election "had consequences, endangering the life of the vice president and bringing us dangerously close to a bloody constitutional crisis." With the final outcome, Sasse said he was concerned that Congress "is a weaker institution than the Founders intended, and it is likely to shrivel still smaller."

"A lot of Republicans talk about restoring Congress' power from an already over-aggressive executive branch," Sasse said in his statement. "If Congress cannot forcefully respond to an intimidation attack on Article I instigated by the head of Article II, our constitutional balance will be permanently tilted. A weak and timid Congress will increasingly submit to an emboldened and empowered presidency. That's unacceptable. This institution needs to respect itself enough to tell the executive that some lines cannot be crossed."

Voices4America Post Script. 57-43. 7 GOP voted for Truth/the Constitution. 43 GOP hid behind a false technicality which McConnell had caused. Oh yes, McConnell voted to acquit, then said Trump was “practically and morally responsibly for provoking the events of the day." Wrap your mind around that! #14thAmendment

Boehner goes off script, tells Cruz to "go f**k yourself.”

Watch this amazing conversation between @potus Joe Biden and Nurse Erica Harris, who runs aNYC hospital’s COVID-19 testing program. Another chance to feel how lucky we are that #JoeBidenIsPOTUS. https://t.co/bZx8A5WfQg

Watch this amazing conversation between @potus Joe Biden and Nurse Erica Harris, who runs an NYC hospital’s COVID-19 testing program. Another chance to feel how lucky we are that #JoeBidenIsPOTUS. https://t.co/NJEREp88jn

I posted this BBC coverage of President Biden’s visit to Texas because most American coverage seemed to be on #CPACSeditionists. #ILoveJoeBiden https://t.co/UxdMRckViU

It’s genuinely alarming to me how many people don’t understand that overruling the Parlimentarian doesn’t automatically get you a $15 minimum wage. We. Do. Not. Have. The. Votes. Your beef is with Joe Manchin and Kyrsten Sinema, not the Vice President.

Good riddance. Durham let Trump and Barr use him to create a fake impression that the Biden’s were under suspicion. That’s inexcusable. https://t.co/mGlnJZJiZM