Michael Bloomberg is open to spending $1 Billion to defeat Trump.

SAN MARCOS, Texas — Michael R. Bloomberg on Saturday did not rule out spending a billion dollars of his own money on the 2020 presidential race, even if he does not win the Democratic nomination, and said he would mobilize his well-financed political operation to help Bernie Sanders or Elizabeth Warren win in November if either is the party nominee, despite their sharp policy differences.

Mr. Bloomberg's plans would effectively create a shadow campaign operation for the general election, complete with hundreds of organizers in key battleground states and a robust digital operation, ready to be inherited by the party nominee — regardless of who that nominee may be.

Already, Mr. Bloomberg has spent more than $200 million on advertising, putting him on pace to spend by early March about the same as what President Barack Obama's campaign spent on advertising over the course of the entire 2012 general election. If Mr. Bloomberg fails to win the nomination, future spending would be redirected toward attacking Mr. Trump.It depends whether the candidate needs help; if they're doing very well, they need less. If they're not, they'll need more," he said in an interview after a lunch stop at a barbecue restaurant during a campaign swing through Texas.

While he did not rule out dropping a billion dollars on his effort, the former mayor of New York City blanched slightly at the size of the number, before mentioning the $2.8 billion he spent on charitable contributions last year, with the bulk going to his alma mater, Johns Hopkins University.

His extraordinary wealth, estimated at more than $50 billion, has drawn a series of attacks from the liberal candidates in the field, who argue he is essentially trying to purchase the party nomination. Some of their aides also fear that Mr. Bloomberg could turn his massive machine against them in the primary, leveraging his spending to block them from capturing the nomination.

"I really don't agree with them," he said, of Mr. Sanders and Ms. Warren, "but I'd still support them, yes, because compared to Donald Trump that's easy."

While most of the candidates are spending the bulk of their time in the first four primary states, Mr. Bloomberg is orienting his operation toward the Super Tuesday primaries in states like Texas on March 3, when about 40 percent of all the delegates are at stake.

With recent polling showing four candidates — Mr. Sanders, Ms. Warren, former Vice President Joseph R. Biden Jr. and former Mayor Pete Buttigieg of South Bend, Ind. — all in a position to win both Iowa and New Hampshire, Mr. Bloomberg could play an influential role in the primary process, once the race moves past the early contests. His aides have indicated that Mr. Bloomberg is not inclined to keep pouring money into an extended contest with Mr. Biden and would instead reorient his campaign into an organization dedicated to battering Mr. Trump, should the former vice president emerge as the leader in the race.

His spending, entirely self-funded, has meant that though Mr. Bloomberg meets the polling requirement for the party debates, he does not meet the donor qualifications for participating.

As he campaigned across Texas, Mr. Bloomberg cast that decision as a campaign strength, illustrating his independence from financial interests.

Yet he also criticized the party's process, echoing concerns leveled by other candidates who say the rules set by the Democratic National Committee are excluding qualified contenders. Mr. Bloomberg will not appear on the debate stage on Tuesday, when the candidates meet in Des Moines for their final face-off before the Iowa caucuses.

"I think Cory Booker's got a good complaint. If I wanted to complain, I could make a good case that it wasn't fair," he said. "In the meantime, while they're debating, I'm out visiting a whole lot of people. I'm not wasting the time."

Voices4America Post Script. Mike Bloomberg will do the right thing. Now it is up to us to beat Trump no matter who is our candidate. #BlueWave2020

An aside, Trump has shown he will do anything to keep holding power, including putting the wold at the brink of war. We saw him do that in the Middle East. There was no “imminent danger." 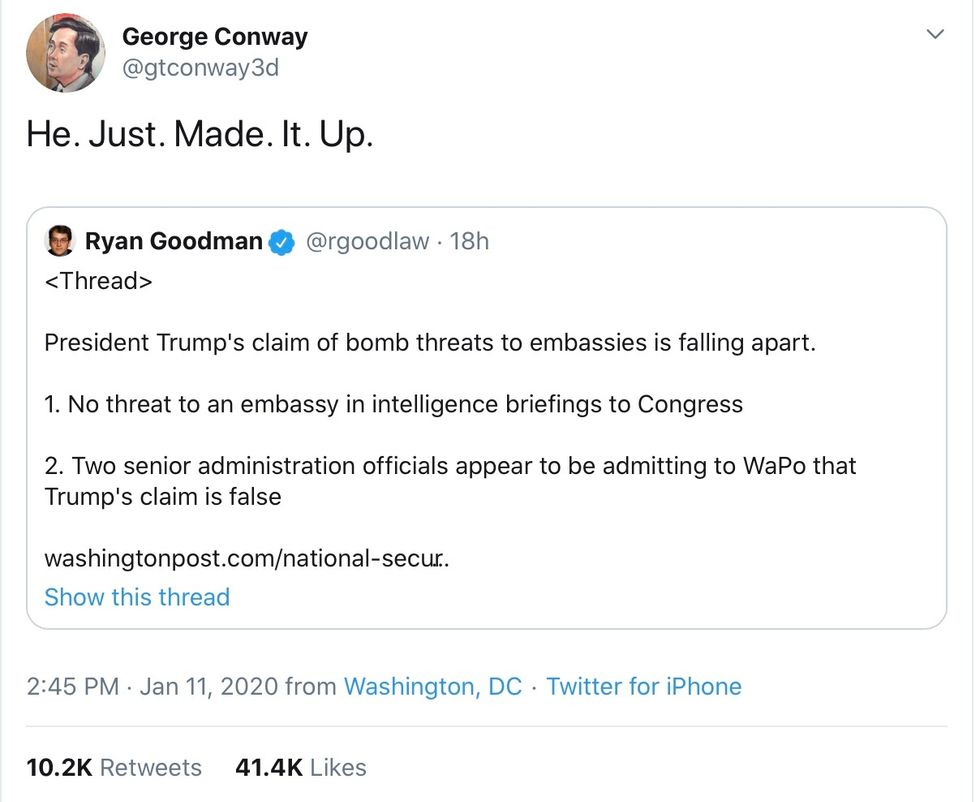