Hillary Clinton's Eulogy for Edie Windsor Is also an Impassioned Call to Resist.

On Friday, hundreds of people came together at New York City's Temple Emanu-El for the funeral of Edie Windsor, the "mother of marriage equality" who died on Tuesday at age 88. Windsor sued the United States government when it refused to recognize her marriage to Thea Spyer; her suit ultimately toppled the federal ban on same-sex marriage and paved the way for nationwide marriage equality. Among the luminaries who paid tribute to Windsor was Hillary Clinton, whose beautiful eulogy also functioned as an impassioned call to resist injustice with Windsor's indomitable positivity and joy.

Clinton began by asking: "Doesn't it just feel great being here to honor and remember someone who had such a positive, lasting influence on our country and the world?" That might seem like an oddly cheerful start for a eulogy, but Friday's proceedings had a celebratory air given Windsor's extraordinary accomplishments and richly lived life. (She remarried last year.) Windsor, Clinton said, "didn't set out to make history"—but the love she shared with Spyer was "its own quiet revolutionary act." When Spyer died in 2009 and the government demanded that Windsor pay an immense estate tax, "she knew she had two choices: Accept this painful injustice or fight back. She chose to fight back, all the way to the highest court in the land."

The day Edie won, much of America cheered with her … with a recognition that a wrong had been righted. Through it all, her strength never wavered. … It is fitting that she will be immortalized in history books in that landmark decision synonymous with equal rights and dignity under the law. But she didn't stop there. She continued to support the needs and the rights of the LGBT community. She helped change hearts and minds, including mine. And we are forever grateful to her for that.

Then Clinton reached the core of her address: the tension between our desire to improve the world and our despair over its seemingly intractable injustices. Windsor, Clinton pointed out, faced a great many injustices. She took care of Spyer for decades as her multiple sclerosis worsened, and when Spyer died, the government wouldn't recognize their marriage; instead, it sent her a tax bill that she wouldn't have had to pay if Spyer had been a man. This blatant cruelty might have made Windsor bitter or resentful toward her country. But, Clinton explained:

How she experienced loss, grief, and injustice made her only more generous, more open-hearted, and more fearless in her fight. She refused to give up on the promise of America. There wasn't a cynical, defeatist bone in her body. That's especially important for us to remember now. Through her determination and sheer force of will, she brought us another step closer to that more perfect union. Now, in this moment when so much hard-fought progress is hanging in the balance, it is up to all of us to pick up where she left off.

Clinton's message, which echoes former President Barack Obama's tributeissued shortly after Windsor's death, isn't exactly subtle. But it is a critical reminder in these exceedingly dark times of the wonderful things that America can accomplish when Americans stand up to prejudice and fear. Windsor fought for equality and achieved it in her lifetime. What will we achieve in ours? The forecast seems dire these days. But in her eulogy, Clinton urges us not to give up hope, not to waste our days with sorrow and helplessness. She closed with a quote from the poet Mary Oliver: "Tell me, what is it you plan to do with your one wild and precious life?"

"Let us continue to be inspired by Edie's wild and precious life," Clinton said. "And let us make her proud every day of how we answer that question for ourselves. Thank you, Edie." 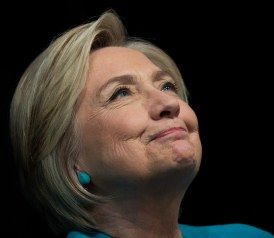 “Let us continue to be inspired by Edie's wild and precious life."

Addendum. Here is the video of the speech.