For Holocaust survivors, Trump’s refusal to concede is a bad memory.​

"I had worried so much before the election. I was happy to find out that maybe I was wrong and that I had overreacted, but now I can't help but feel alarmed," said Fogel-Weiss, a survivor from the Czech town of Botragy, now in Ukraine. "Everyday reminds me and others like me of the history we thought we left behind. It's not an easy time for survivors or immigrants who get how easily it can happen here."

She is far from alone. In post-election interviews, numerous Holocaust survivors report feeling both relieved at the results, and nervous about President Donald Trump's continued unwillingness to concede defeat.

Manfred "Manny" Lindenbaum, 88, is one of them. The past four years had been tough ones for the New Jersey resident.

"I was actually going into a deep depression," he said. "I was functioning, but I couldn't sleep at night, my mind was going back and hearing rhetoric that wasn't much different than what was going on in the beginning of the Nazi era."

Lindenbaum was five when he was "literally chased out" of his childhood home in Unna, Germany in October, 1938, along with 17,000 German Jews of "Eastern" origin in an event known as PolenAktion. Stripped of their citizenship, his family became homeless and stateless overnight. A year later, when the Nazi invasion was imminent, his parents made the bold decision to put their three children on a train bound for the port town of Gdansk, where the last Kindertransport boat to England was departing. Only Lindenbaum and his brother were allowed to board. His sister, 14 at the time, was deemed too old. He would never see her or his parents again. 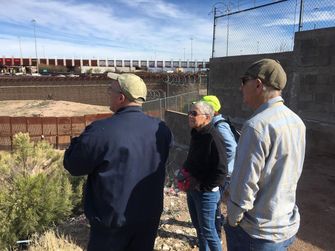 Manny Lindenbaum (R) touring the border with the Rev. Mayer and former HIAS VP of Communications, Roberta Elliott in March 2019

"When I see images of refugees at the borders, well, I know what happens to kids when they're separated from their parents," said Lindenbaum, who toured shelters in Mexico last year after the Trump administration ousted asylum-seekers as part of its Remain in Mexico policy.

"It was particularly moving and difficult for him given his own border experience," said Mark Hetfield, president and chief executive officer of the Hebrew Immigrant Aid Society (HIAS) who accompanied him.

HIAS, which had once help Lindenbaum immigrate to the United States, arranged the visit to the border. There, Lindenbaum saw refugees forced to remain in limbo in a no-man's land similar to the one he experienced in Zbąszyń.

For Lindenbaum, voting for Joe Biden was more than supporting a particular candidate. It was a moral imperative. "It's beyond comprehension that we did that," he said, speaking of what he saw at the US-Mexico border. "I still get nightmares."

On Saturday morning, Nov. 7, with Biden still undeclared, Lindenbaum went on a 10-mile bike ride instead of spinning his wheels indoors, waiting for the votes to be counted.

"By the time I returned, Biden was the declared winner," he said. "It felt like a giant weight had been lifted off my back."

He wasn't the only survivor to finally exhale. a video of Holocaust survivor grandparents tearing up at the news went viral. Survivors in Zoom support groups, who had reported feeling tense and fearful under Trump, and increasingly isolated under the pandemic, expressed relief.n

“After months of suffering from insomnia and anxiety, many Holocaust survivors were elated that Trump, whom they associated with Hitler, did not win a second term," said New York clinical psychologist Dr. Eva Fogelman, an expert on Holocaust PTSD.

In Fort Greene, Brooklyn, Cordula Hahn, who had been a hidden child in Holland during World War II, rejoiced at the news, banging a pot, getting showered with glitter outside the Barclay Center with her two daughters and son-in-law, enjoying their first hug since March.

"The outburst of emotions was huge," she said. "I had a flashback from Liberation Day in May 1945 in the Netherlands, where my parents, older brother and I were in a parade." 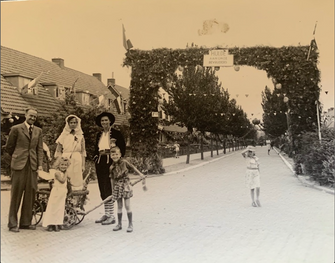 "It felt like the end of the war," said Natalie Scharf, who felt the stress of the last four years dissipating as she delighted in the news that her adopted city of Philadelphia played such a pivotal role in flipping the country blue. "I felt a real obligation to vote for Biden. I don't have to imagine how much worse it can get under Trump. I lived through it."

Scharf was 15 when the Gestapo raided her home one night, arrested her along with scores of other Jewish teenage girls in her town and loaded them on a train bound for Sudetenland, where she was imprisoned at Gabersdorf women's forced labor camp, only to emerge as one of the sole survivors of her family.

"When I saw them marching with the torches in Charlottesville, I had terrible heart palpitations," she said. "They looked just like the Nazis of my childhood, and hearing them scream, 'Jews will not replace us,' 'blood and soil,' it was exactly as I remembered it. And this president said they were fine people? Good riddance. It feels like liberation. We made it!"

For Aviva Slesin, an Academy Award-winning documentary filmmaker and adjunct professor at NYU-Tisch, who was smuggled out of the Jewish ghetto in Siaulia, Lithuania in 1943 when she was nine months old and spent the war in hiding, Biden's victory took her back to the moment she first laid eyes on her new country.

Aviva Slesin, arriving in NY with her mother in 1953.

"I thought of being on that boat as we entered New York harbor. Everyone started to weep. Here we were refugees from Europe, coming to the shore of a place of hope," she said. "And then I thought, had this man [Trump] been president at the time, he would not have welcomed us. He would not have offered us the hope we needed to create a new life."

In the weeks leading up the election, Celia Ores, an Upper West Sider from the Polish town of Dubienka, bought a bottle of champagne and kept it chilled in her fridge. President Trump's rise to power was a shock to her system. But it was his cruelty to children that triggered her earliest traumatic memories.

"I was playing in the garden across the street from our house, when suddenly the police began to chase us out because we were Jews. I guess I was a good runner, but behind me was a two-year-old girl who wasn't," she said. "I saw this very elegant Nazi pick her up by her legs, throw her against the tree and kill her. I ran home and told my mother. She said, 'That's it. It's time to leave.'"

The family fled at night, crossing the Bug River to the east, staying with an uncle in Bialystok until the Russians packed all the Jews on a train bound further east. She was just three years old when she arrived at a gulag, a Soviet work camp. Her younger brother died of disease shortly after arrival. Over the next four years, they moved from Siberia to Kazakhstan, where she spent her days gathering tinder wood and struggling to find food.

"You're hungry all the time. You're not clean and the most horrible people are taking care of you," Ores said. "When I saw how Trump took breastfeeding mothers away from their babies, that children died at the border, I saw Americans behaving like Nazis. Who can put children in cages? I was a pediatrician for 50 years at Columbia University Medical Center. Whoever heard of such a thing happening here?"

When she heard that Joe Biden was the declared president-elect on Saturday morning, Ores called her grandson to come over and help her pop the bubbly. "It felt like Victory Day!" she said.

But her bubble began to burst with news of Trump challenging the election results.

"A predator is most dangerous when wounded," said Björn Krondorfer, director of the Martin Springer Institute at Northern Arizona University, and one of five German-born Holocaust scholars who co-wrote an Op Ed titled, "It's Not Too Late for American Democracy-Yet," that ran in the Forward ahead of the election, warning of the threat of totalitarianism should Trump win a second term. "And that's the situation we find ourselves in. It is scary (again) to see his political maneuvering to get into a position in which he can call on the Insurrection Act."

Last week Yale history professor Timothy Snyder, author of "On Tyranny: Twenty Lessons From the 20th Century," declared Trump's tactics of rejecting the election results no joke, writing in The Boston Globe, "a claim that an election was illegitimate is a claim to remaining in power. A coup is under way, and the number of participants is not shrinking but growing."

And that's what's so frightening to the people who lived through the rise of European fascism and the Holocaust.

"More than 70 million Americans voted for Trump," said Fogel-Weiss. "After four years of challenging the rule of law, peddling lies and propaganda, anti-Semitism, scapegoating immigrants, and denying science -all of it has been such a tremendous blow to democracy — they all follow their leader."

Fogel-Weiss said she is cautiously optimistic that democracy will prevail if there is a peaceful transition to a new president. Others say they won't sleep soundly until President-Elect Joe Biden is inaugurated on Jan. 20.

Dr. Fogelman reports similar fears reemerging among survivors in her practice. "They wonder what havoc will Trump wreak before the inauguration and will Biden, with his good negotiating skills, be able to work across the aisle to bring the nation together?"

Marisa Fox-Bevilacqua is a New York-based journalist who is writing and directing her first documentary, "My Underground Mother," about her search for her mother's hidden Holocaust past.

Voices4America Post Script. This is a very moving account of Holocaust survivors reacting to Trump. When he separated the children from their parents, they knew who they had to resist.

Push your GOP elected officials to overcome their fear of losing in GA or of Trump or their love affair with Trump and work with Joe and do the work of the American people. #ConcedeNow

Just for the record. President Biden’s loan program. An Overview.

Loyalty to a country or a man? What to expect if we don’t stop Trump.

Will America remain a Democracy? That is up to us.

Watch the historic swearing in!!111

Why are teenage black boys men but these 40 year old grifters are kids!??? #TheView

The 1/6 hearings have shown that Trump knew his effort to overturn the election was illegal & unconstitutional. He did it anyway. Trump’s conduct was illegal under existing law and would be under our new bill, too. Our bill also prevents other future efforts to steal elections. https://t.co/HaMCUSY8xv

🚨 BIG NEWS: Last night, Florida State Senator @senpizzo filed a major lawsuit against Ron DeSantis and others asking the courts to stop DeSantis' illegal transfer of migrants. Let's amplify @senpizzo by getting him to 30k today. Retweet and follow him now!!