Senator Elizabeth Warren of Massachusetts said Tuesday that she would not participate in a Fox News town hall as some other Democratic candidates have, calling the media outlet "a hate-for-profit racket" that seeks to turn Americans against one another.

In a series of messages posted on Twitter, Ms. Warren, who is one of 22 people seeking the Democratic nomination for president, accused the network of giving "a megaphone to racists and conspiracists" and providing cover for corruption.

She also returned to one of her campaign's central themes in her attack on Fox News, framing the network as the sort of corporate "profit machine" she has railed against.

"Hate-for-profit works only if there's profit, so Fox News balances a mix of bigotry, racism, and outright lies with enough legit journalism to make the claim to advertisers that it's a reputable news outlet,'' she said. "It's all about dragging in ad money — big ad money."

"But Fox News is struggling as more and more advertisers pull out of their hate-filled space. A Democratic town hall gives the Fox News sales team a way to tell potential sponsors it's safe to buy ads on Fox," she continued. "I won't ask millions of Democratic primary voters to tune into an outlet that profits from racism and hate."

The network did not immediately respond to a request for comment.

Ms. Warren's stance diverges from some of her Democratic rivals who have appeared at town hall-style events on the cable network, saying that it's important to reach out to voters of all persuasions.

Senator Bernie Sanders of Vermont took part in a town hall on the network in April and Senator Amy Klobuchar of Minnesota did the same last week. Pete Buttigieg, the mayor of South Bend, Ind., is expected to participate in one on Sunday.

Whether to appear on Fox News has underscored a deeper tactical divide among the 2020 Democratic candidates: Double down on attracting the left-leaning coalitions that comprise much of the party's primary electorate, or attempt to make inroads with millions who supported Mr. Trump in 2016 — and who receive a high percentage of their information from Fox News.

The Democrats who have ventured onto Fox News's airwaves have seen dividends, in terms of exposure.

Mr. Sanders drew more than 2.5 million viewers, the biggest town hall audience to date for the 2020 field. In a Fox News event last week, Ms. Klobuchar was seen by 1.6 million people, roughly twice the audience that watched her during an April appearance on CNN.

Senator Kirsten Gillibrand of New York has agreed to do a town hall-style event in June. Julián Castro, the former housing secretary, has been in advanced discussions with Fox News, and Senator Cory Booker of New Jersey has said he is open to the idea.

In her Twitter messages, Ms. Warren emphasized that she liked town hall-style events and had taken part in dozens already this year. But "a Fox News town hall adds money to the hate-for-profit machine," she said. "To which I say: hard pass."

Voices4America Post Script. I am with Elizabeth on this. Why give Fox legitimacy and ratings? Share how a real Democrat behaves. #RealDemsDontDoFox 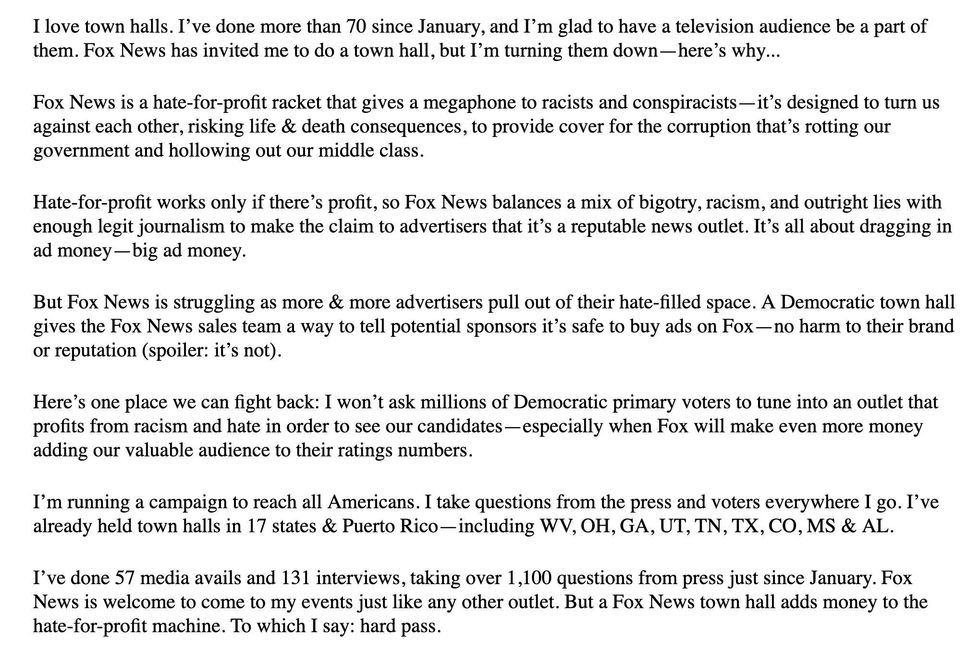 Matt fuller who writes for Huff Posts makes this additional and important point:

Elizabeth Warren welcomes Fox News to attend her events and ask her questions. She's not taking credentials or refusing to engage with Fox reporters.

What she isn't going to do is give them exclusive content, let them sell ads, and lend them her credibility.