Democrats look to win governor's races in the heart of Trump country on Tuesday. Today!

In what would be a troubling sign for Republicans ahead of next year's elections, Democrats have a shot at seizing the governor's mansions in two Southern states President Trump won handily in 2016.

Democrats, on the other hand, are trying to keep the focus on local issues in the hopes that they can cobble together enough voters to beat the GOP in these ruby-red states.

Here's what's happening in Kentucky and Mississippi ahead of Tuesday's elections.

Republican Governor Matt Bevin's latest pitch to Kentucky voters could be summed up with two signs at his rally last Saturday.

"Every candidate on this side, pro-life, pro-second amendment, pro-president, pro-America, pro-working class individual. On the other side, the same is just not true," Bevin said at the event in Clark County. "Vote your values and not your party."

Kentucky law prevented governors from running for re-election until 1992. Since then, no Republican has gotten a second term, despite the fact that the state is dominated by Republicans at the federal level and hasn't voted for a Democratic presidential candidate since 1996.

The Bluegrass state has a history of electing Democratic governors even as it regularly sends Republicans to Washington. In 2007, they elected Steve Beshear, who won again in 2011. Now his son, state Attorney General Andy Beshear, is looking to return the governor's mansion to Democratic hands.

In 2015, Bevin beat his Democratic opponent in a surprise landslide, with voters decisively breaking his way in the week before Election Day. It was something of a comeback win for Bevin, a millionaire businessman who had never held elected office but who had tried to beat Senator Mitch McConnell in the 2014 Republican primary. McConnell won that race by nearly 40 points.

This time around, Bevin has had to deal with sky-high disapproval ratings. He was the most unpopular governor in the nation for the most of the summer, according to Morning Consult, and had alienating spats with teachers over their pension fund.

National Democrats encouraged Beshear, the state's attorney general, to take on Bevin by building off the support of teachers and state workers. According to Robert Goe, a former Republican candidate for state representative, Beshear's strength among public sector workers has helped keep Beshear competitive.

Goe is an adamant Bevin supporter, in part due to the state's strong economy and shrinking unemployment rate. But like many voters in Kentucky, he also likes Bevin's conservative stances on guns and abortion.

This melding of social and economic issues looks a lot like the strategy Mr. Trump is likely to deploy next year. Beshear, meanwhile, has said repeatedly that he supports abortion rights and accused Bevin of opposing the procedure even in cases of rape or incest.

Democrats in Kentucky have framed Tuesday's vote as a referendum on Bevin and focused on local issues such as education and healthcare. At the recent Carl D. Perkins Memorial Breakfast in Pike County, in the heart of the state's coal country, Beshear said the state cannot "survive another four years of Matt Bevin."

Alongside Bevin in coal country was state Representative Rocky Adkins, a former primary opponent of Beshear who won a lot of these Eastern Kentucky counties when Democrats chose their nominee in May. In a similar move, Vice President Mike Pence was deployed to the state on Friday to rally voters in heavily Republican areas Bevin lost in the primaries.

Mr. Trump, who won the state by 30 points, will be holding a rally for Bevin in Lexington on Monday. Republicans hope that they can inspire enough of the GOP faithful to show up and pull Bevin across the finish line, and of the three gubernatorial races scheduled for November, the president's support may matter here the most.

"Turnout is always been low in Kentucky for these off-year elections. Last time when I won it was in the low thirties. It's going to be somewhere in the mid-thirties, I would say. What the president coming does is just reminds people, 'Oh, there's an election tomorrow?' It actually reminds people that tomorrow is Election Day. So that's good, no matter how people vote," Bevin told reporters in Winchester.

David Turner, a Democratic Governors Association spokesperson, said he was confident people would vote on local issues like health care and education, regardless of whether they support Mr. Trump.

"I think this is a test theory about whether voters are going to vote on their local issues that they say poll after poll are most important to them," Turner told CBS News. "Or they're going to vote based on who's in what party."

Despite Mississippi's well-earned reputation as a Republican stronghold, Democratic gubernatorial candidate Jim Hood is a formidable candidate. The four-term attorney general won every county in the state for the primary, and by a wide-margin in previous state elections despite Mississippi's pronounced conservative lean.

Meanwhile, Lieutenant Governor Tate Reeves, the GOP nominee, has had his work cut out for him.

Despite being the right-hand man to current Governor Phil Bryant, who is very popular in the state, Reeves struggled to win the Republican nomination. He was unable to win the GOP nod outright in May, and only secured the nomination after a run-off in August.

But this is still a Republican state, and the latest Mason-Dixon poll shows Reeves with a slight edge over Hood. The Democrat's internal polling, meanwhile, shows Hood beating Reeves by a similarly narrow margin.

Mr. Trump recently held a rally here to get his base fired up. During his appearance, the president said he was surprised to be in Mississippi fighting for a Republican to win a gubernatorial race.

Unlike Beshear in Kentucky, Hood is an opponent of gun control and abortion rights. Hood has even been borrowing Trump's "drain the swamp" messaging and uses it against Reeves in ads and on the trail.

In a press conference ahead of Mr. Trump's appearance in Tupelo, Hood said, "I can't do anything about the swamp that the president is trying to clean up in Washington with all that bickering and things going on. But I can drain the swamp here that Tate Reeves has created."

Hood is also distancing himself from national politics and will not comment on impeachment.

"I don't have a vote on that issue, like I said, I'm trying to drain the swamp here," Hood said.

The battle between the two has instead leaned on state issues like education, Medicaid expansion and gas taxes. Mississippi is one of 14 states that didn't expand Medicaid in 2010, a policy Hood promises to reverse. Reeves, meanwhile, says that doing so would be an "Obamacare expansion."

"Jim Hood will tell you that welfare and Washington are the only things we need," Reeves said after winning the Republican nomination.

The Mississippi Strong PAC, backed by the Republican Governors' Association, has spent over $2.37 million to help Reeves. The Democratic Governors Association has pretty much spent an equal amount, with $2.36 million in disbursements for Hood.

RGA spokesperson Amelia Chassé Alcivar said Reeves has "run a great campaign centered on the issues voters care about, and we feel strongly that he is going to be the next Governor of Mississippi."

Reeves is banking that he can turn out Republican voters in a state Mr. Trump won by 17 points in 2016. The hope for Hood is that he can combine enough African American voters in cities like Jackson with rural white voters who backed Mr. Trump in the last presidential election.

However, even if Hood keeps Reeves from winning a majority of the vote, there's still one more hurdle. A holdover rule from the Jim Crow-era states that a gubernatorial candidate must win at least 50 percent of the popular vote and 50 percent of the Mississippi's 122 state House districts.

If no candidate does this, the state House of Representatives gets to pick the governor. Republicans hold a 74-44 majority in the state House, which could allow them to pick Reeves even if Hood wins more votes. However, a federal judge recently expressed "grave concern" about this quirk of the Mississippi electoral system, signaling that courts could get involved if the rule is activated, and an appeal is made.

There are elections happening across 22 states on 11/5. At stake: 3 governorships, 3 attorneys general, 3 state secretaries of state, 4 state legislatures & countless local/municipal seats. Each one is an opportunity. #VoteOnNov5 #DemsVote

One race to watch tonight is Jennifer Riley Collins's bid for attorney general in Mississippi. If she wins, she would be the first black woman elected to a statewide office in Mississippi; she's running against state treasurer Lynn Fitch, who was chair of Mississippi Women for Trump in 2016. Riley Collins gives a wide-ranging interview about her platform and goals here: BuzzFeed and Broadsheet, at Fortune 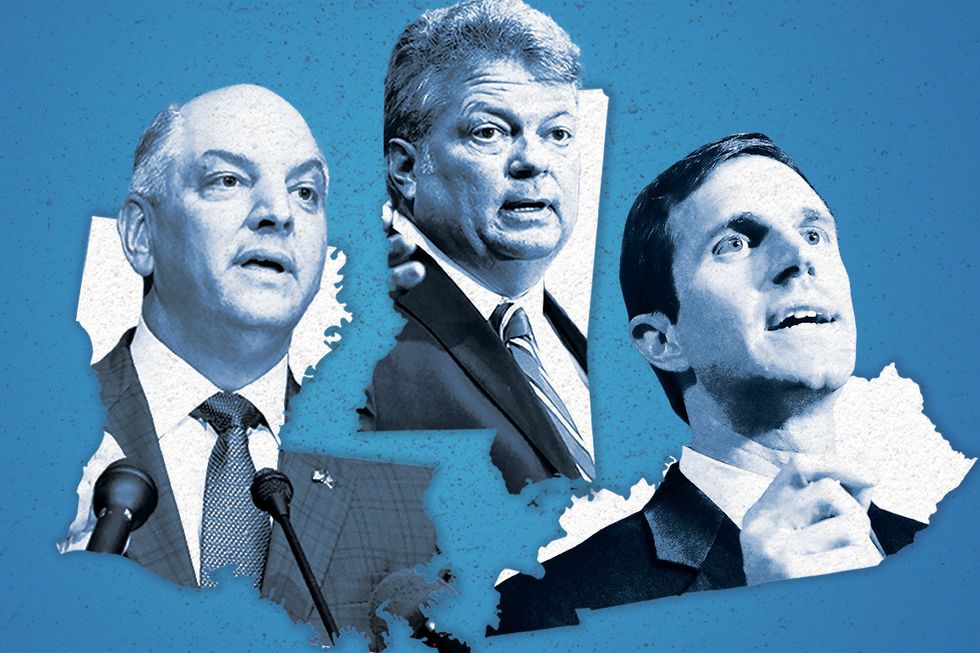 Purging public servants disloyal to a regime is banana-republic stuff. Our federal employees work for the American people, not the president. https://t.co/J6aRZ5iVqD