The passage of time, in this pandemic, has been a hard thing to gauge. To take one example, the phase III trials of covid-19 vaccines, which scientists had warned may not be completed until the end of the year, are coming to blessedly rapid conclusions. Last Wednesday, Pfizer and BioNTech announced that their vaccine appears to be both ninety-five-per-cent effective and safe, even for older people—a historic victory. Moderna's version, just a step behind Pfizer's, appears to be effective, too, and other vaccines will follow. What propelled the trials forward, though, was the acceleration of the pandemic itself. The positive cases in the control groups, which were given placebos, piled up so quickly that it became easier to see that the vaccines were working. 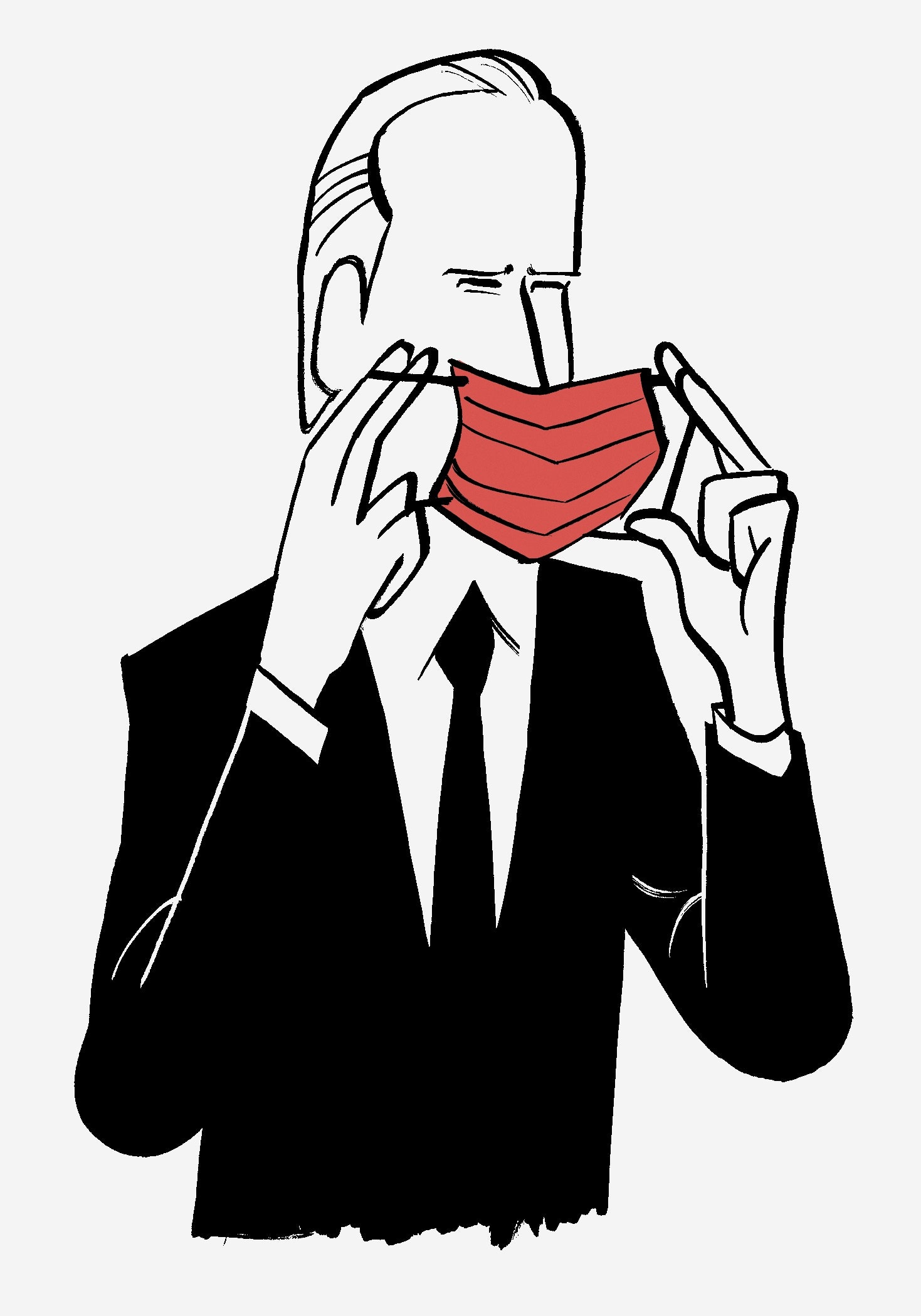 Still, the most torturous interval may be the one between now and Inauguration Day. On January 20, 2021—a year to the day since the first case of covid-19 in the United States was confirmed—Joe Biden is due to be sworn in as President. But, until then, Donald Trump will linger in office for weeks in which, the Institute for Health Metrics and Evaluation projects, the average number of deaths will rise to more than two thousand a day. (On the day of Pfizer's announcement, the number of new cases in the United States exceeded a hundred and sixty thousand.) Thanksgiving, Christmas, and New Year's threaten to become national superspreader events. Biden will have to deal with a crisis that may still be escalating. As a result, his coronavirus mission must have an economic, an epidemiological, and a moral dimension.

Last week, at a virtual roundtable that Biden convened with frontline workers, Mary Turner, the president of the Minnesota Nurses Association, began to cry as she described staff shortages and how, even now, her colleagues have to "beg" for personal protective equipment. "You got me emotional," Biden said, close to tears himself. Unlike Trump, he has no problem mustering empathy, but he must also make up for the President's failure to develop a true national strategy for getting supplies to hospitals, building a testing and contact-tracing system, and supporting health-care workers. "We nurses know that we are facing immense death and suffering in the coming weeks," Turner said. "And we will be there. But we need to act now, we need to act quickly."

Biden can undertake some immediate actions, like recommitting to the World Health Organization, by executive order. For others, such as putting together a new covid-relief package that will help individuals, businesses that may be forced to close, and states facing budget shortfalls, he will need Congress's coöperation. (And control of the Senate won't be clear until after Georgia's runoff elections, on January 5th.) Biden has spoken of a nationwide mask mandate; even with limits on federal power, he can use tools like incentives and persuasion to try to organize one. He can also lend his authority to guidelines for targeted shutdowns and reopenings.

Trump and his crew, meanwhile, keep finding new ways to make things worse. Last week, when Gretchen Whitmer, the governor of Michigan, announced a three-week "pause" on certain activities in that state, in an attempt to halt the virus, Trump's preferred coronavirus adviser, Scott Atlas, tweeted that Michiganders should "rise up" against the new rules. ("#FreedomMatters.") Biden, asked about that comment, posed a pertinent question: "What the hell is the matter with these guys?"

Atlas's remarks were particularly corrosive because Michigan, which Biden won by almost a hundred and fifty thousand votes, is one of the states whose election results Trump is baselessly contesting. Trump is also withholding transition resources and intelligence briefings, and he has kept Biden's coronavirus task force—which the President-elect has already assembled—from fully engaging with career public-health officials and scientists in the government, many of whom Trump has sidelined and belittled. (As of last week, Dr. Anthony Fauci, whom Trump has called an "idiot and a disaster," had not yet formally met with Biden.) "We've been unable to get access to the kinds of things we need to know," Biden said on Wednesday. He mentioned the Strategic National Stockpile: it's more difficult to make a plan for distributing supplies if no one will tell you what the government has at hand.

Most important, perhaps, Biden's team needs to be part of the planning for vaccine distribution, which will involve the military. Although many aspects of the pandemic response are managed on the state or local level, it is the federal government that has contracted to buy a hundred million doses from both Pfizer and Moderna. (Each person needs two doses.) Only a fraction of those doses will be ready by the time Biden is inaugurated—innovation is fast, but manufacturing is stubbornly slow—and the logistics of getting them to the public is complex. The Pfizer vaccine, in particular, can be stored in a commercial freezer for only five days, and otherwise must be kept at extremely low temperatures. People refusing the vaccine may become an issue in some areas of the country, but at first there will not be enough to go around—or even enough to protect health-care workers. The same is true of advanced treatments, such as the monoclonal antibody cocktail that Trump received when he contracted covid-19. He spent the final weeks of his campaign telling the mostly maskless crowds at his rallies that there is a "cure" for covid-19, which he would make sure they all got free of charge; if that fails to happen, it is Biden who will have to deal with the resulting anger and distrust.

Trump also suggested that he might limit vaccine access to states, such as New York, that he does not regard as friendly. When it's Biden's turn, his priorities will doubtless reflect different values; nevertheless, there will be hard choices that everyone, even in his own party, might not willingly endorse. (Which risk factors matter most? Should border guards be vaccinated before teachers?) Atul Gawande, a member of Biden's Transition covid-19 Advisory Board (and a writer for this magazine), argues that distribution must demonstrate that we can prioritize those who are more likely to be exposed, such as meatpacking and public-transportation workers, over members of the professional classes who can work via Zoom. This would give Biden an opportunity to show that progressivism has immediate, practical meaning. "We've never put those people first in line," Gawande said.

Above all, the process will require transparency, decency, and the rebuilding of trust. Biden has to move fast. He will also need to urge patience. In January, the pandemic will still be demanding a great deal of us, and of him. There are long days ahead. ♦

Voices4America Post Script. We will soon see 200,000 new Covid cases each day, with shocking death totals. As Trump lies and blocks information from the new Admin, Joe has his work cut out for him. This article suggests what we might expect after #46 is inaugurated. Share it so people know. #JoeKamalaWon

Trump’s Labor Secretary is a wrecking ball aimed at workers.

Republicans vote en masse against trying Trump, signaling he is likely to be acquitted of the impeachment charge.

Fauci on what working for Trump was really like.

Good. One witness House managers should call is Brad Raffensperger, to discuss Lindsey’s phone call to him as well as Trump’s, both part of Trump’s overall plot to overturn the election results which culminated in the actions of Jan. 6. https://t.co/AccHx9azJe

Republicans who supported disenfranchising 82 Million voters AND supported Sedition and Domestic Terrorism do NOT support holding those responsible for these heinous acts accountable. Anyone shocked?

Josh Hawley now says he won't be running for president in 2024. No word on whether he'll be running from prosecution.

The Republican party believes Liz Cheney should be punished, not Donald Trump. That's messed up!.