As to Donna Brazile.

.You may have heard that Donna Brazile, the former interim chair of the Democratic National Committee, caused quite a stir on Thursday, November 2, when she published an article on Politico entitled Inside Hillary Clinton's Secret Takeover of the DNC. The article is an excerpt from Brazile's new tell-all book.

Though the facts that Brazile offers - that Hillary had signed a Joint Fund-Raising Agreement with DNC - are not new, Brazile reports, with more than a hint of wrong-doing, that in exchange for raising money and investing in the DNC, Hillary was given control of the party's finances, strategy, and all the money raised.

Brazile concludes, by innuendo only, that this state of affairs proves that the DNC was “rigging the system"to throw the primaries to Hillary. As Kevin Drum wrote about Brazile in Mother Jones, “her prose is so melodramatic that you'd think she had discovered Hillary was a child molester."

Since then, Brazile's claims have consistently been unraveling as multiple people have challenged even the details of the Agreement that Hillary signed with the DNC.

First, it was agreed that the Joint Fund-Raising Agreement was standard practice for the DNC, and the Sanders campaign was offered the same agreement. NBC Reporter Mark Murray even claims Sanders signed it too. 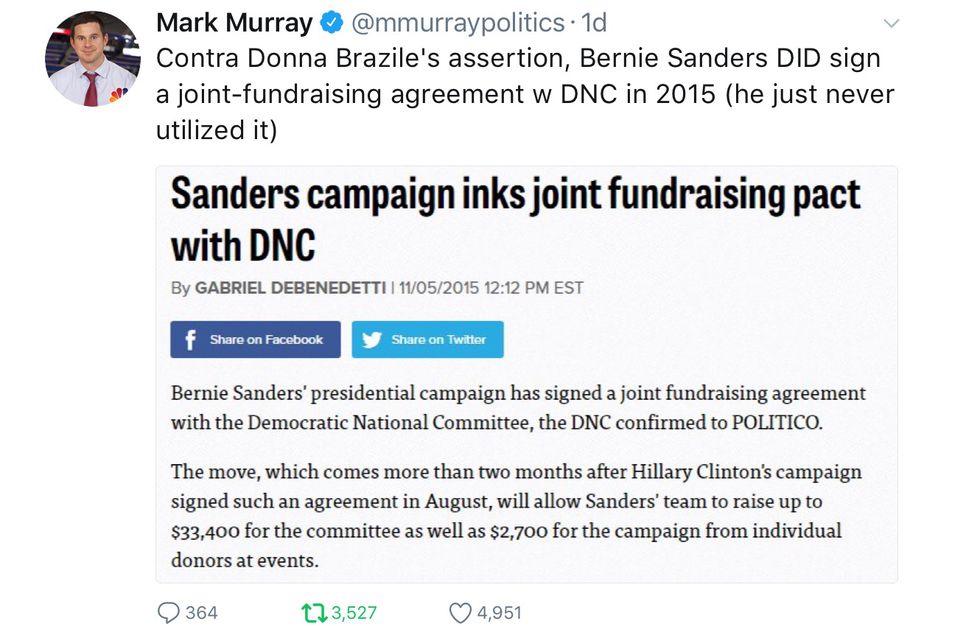 Then, NBC News published the full Clinton-DNC fundraising agreement memo on Friday and a paragraph it contains totally destroys the conspiracy theory that Clinton rigged the primary, "Nothing in this agreement shall be construed to violate the DNC's obligation of impartiality and neutrality through the Nominating process. All activities performed under this agreement will be focused exclusively on preparations for the General Election and not the Democratic Primary."

Others including Lawrence Tribe weighed in too. 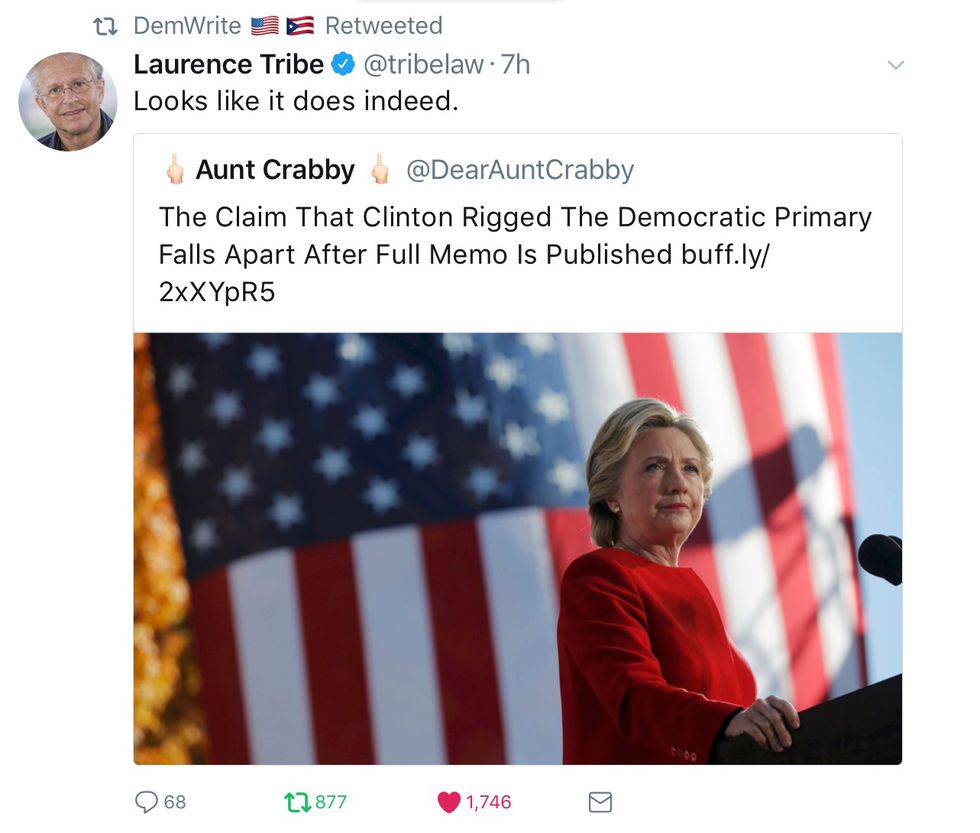 Joy Reid of AM Joy step by step eviserated Brazile's claim. Here is a portion of her Twitter feed. 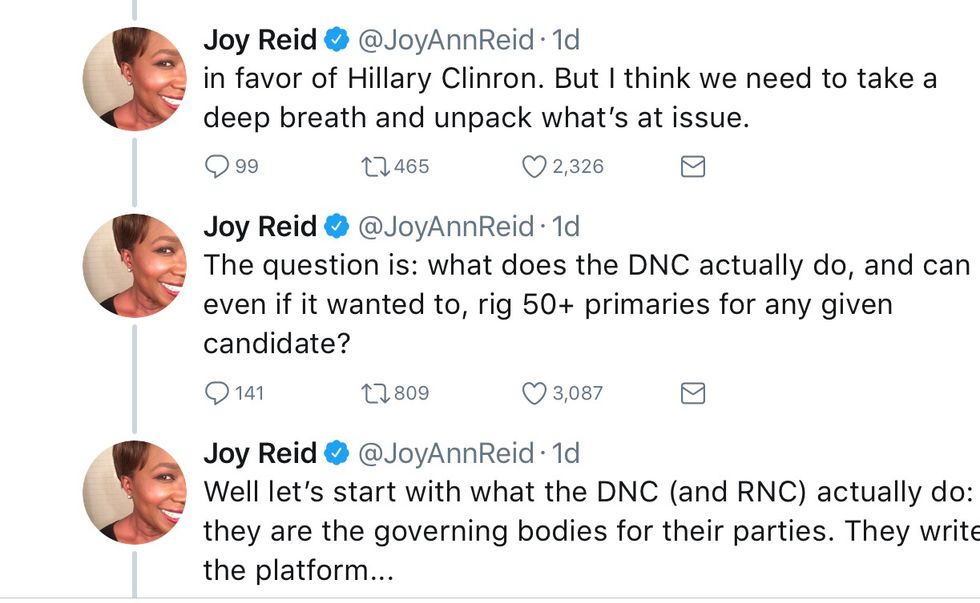 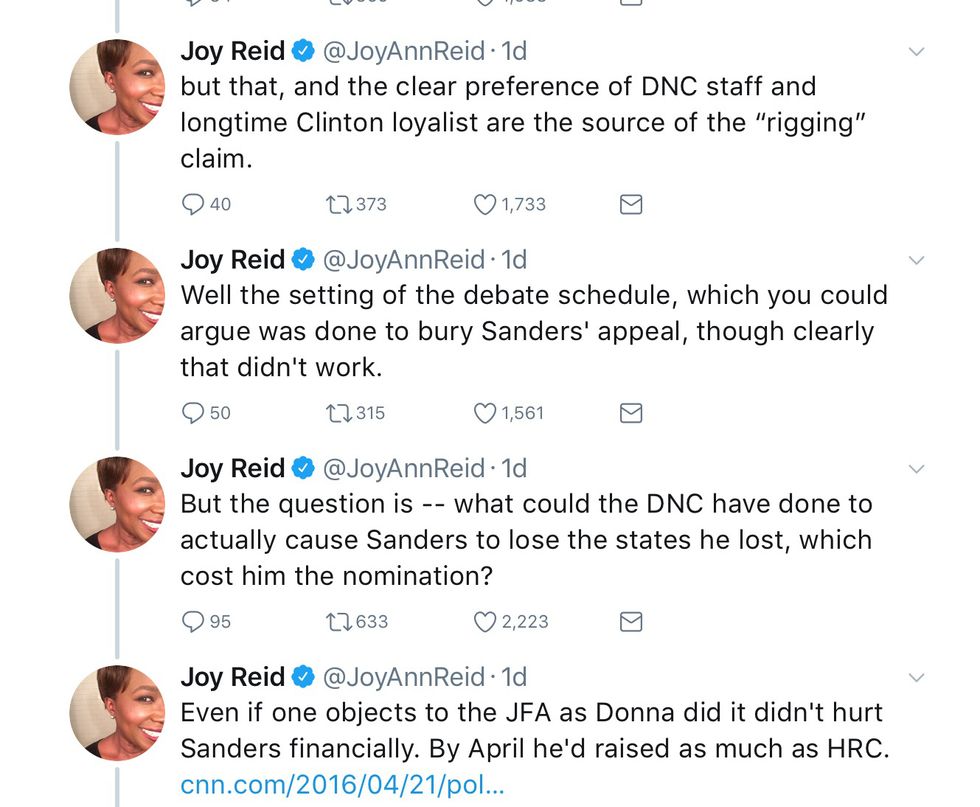 What then is the take away from the Brazile brouhaha .First, without Hillary's support both for the DNC and down ticket candidates, the Democratic Party might truly have collapsed. This in itself is shocking but it is hardly fair to pretend that Hillary or any other Democrats wanted this situation.

Second, The Joint Fundraising Agreement did not "rig" the primaries. Yes, DNC personnel clearly favored Clinton, but so did most other Democrats and most Americans. Hillary Clinton won the nomination by beating Bernie Sanders by 4 million Democratic voters — a wider gap than her popular vote win in November. The DNC didn't do that. Hillary did.

We are still waiting for the Sanders conspiracy drummers that Brazile amplified to answer one simple question: show us on the ballot where the DNC affected the vote.

Third, anyone attacking Hillary will get much media. This is sad. This is one reason there was even a possibility that Trump could wind up in the White House.

In the end, take into account that Donna Brazile, besides being a former interim chair of the Democratic National Committee, is a former commentator on CNN. She lost that tv gig over giving HRC some obvious questions during one of the debates.

Now she seems to be gasping for relevancy straws which she no doubt hopes will sell her book, keep her in the news and land her lucratively back on television. She is a former insider standing outside, and wanting back in.

In the meantime, Brazile gives fodder to Trump talking points, gives those who voted for Trump comfort they did the right thing, and affects the momentum of the Democratic turnout on Tuesday and 2018 if we let her. Don't.

Addendum. 1. Look who has jumped on the Bazile bandwagon- Russian trolls on Social Media...and Troll-in-chief.

Trump even called for a DOJ investigation of Hillary and the DNC last night! What can you expect from someone so desperate.

2. Terry McAuliffee, the outgoing Governor of Virginia has already warned that the timing of Brazile's charges might affect voter turnout in Virginia on Tuesday. The answer to this is clear. Don't let Donna Brazile be another Comey. Vote or get your friends and family to vote for Ralph Northam for Governor of Virginia, and the Democrats running for many local positions in VA.