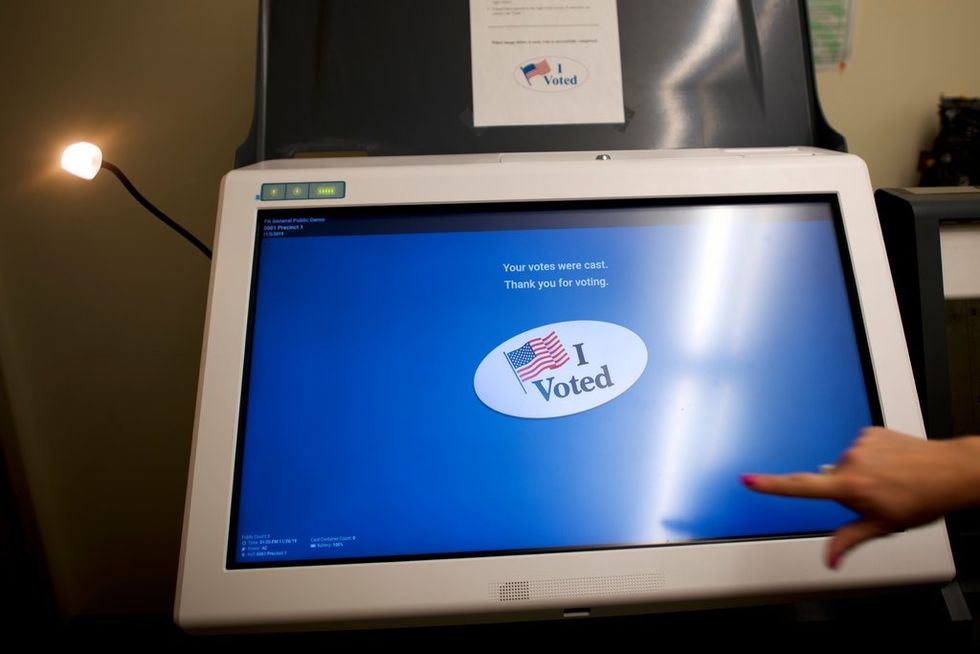 The ExpressVoteXL is a luxury "one-stop" voting system that combines a 32-inch touch screen and a paper ballot printer.Credit...Mark Makela for The New York Times.

EASTON, Pa. — It was a few minutes after the polls closed here on Election Day when panic began to spread through the county election offices.

Vote totals in a Northampton County judge's race showed one candidate, Abe Kassis, a Democrat, had just 164 votes out of 55,000 ballots across more than 100 precincts. Some machines reported zero votes for him. In a county with the ability to vote for a straight-party ticket, one candidate's zero votes was a near statistical impossibility. Something had gone quite wrong.

Lee Snover, the chairwoman of the county Republicans, said her anxiety began to pick up at 9:30 p.m. on Nov. 5. She had trouble getting someone from the election office on the phone. When she eventually got through, she said: "I'm coming down there and you better let me in."

With clearly faulty results in at least the judge's election, officials began counting the paper backup ballots generated by the same machines. The paper ballots showed Mr. Kassis winning narrowly, 26,142 to 25,137, over his opponent, the Republican Victor Scomillio."People were questioning, and even I questioned, that if some of the numbers are wrong, how do we know that there aren't mistakes with anything else?" said Matthew Munsey, the chairman of the Northampton County Democrats, who, along with Ms. Snover, was among the observers as county officials worked through the night to feed the paper ballots by hand through scanning machines.

The snafu in Northampton County did not just expose flaws in both the election machine testing and procurement process. It also highlighted the fears, frustrations and mistrust over election security that many voters are feeling ahead of the 2020 presidential contest, given how faith in American elections has never been more fragile. The problematic machines were also used in Philadelphia and its surrounding suburbs — areas of Pennsylvania that could prove decisive next year in one of the most critical presidential swing states in the country. 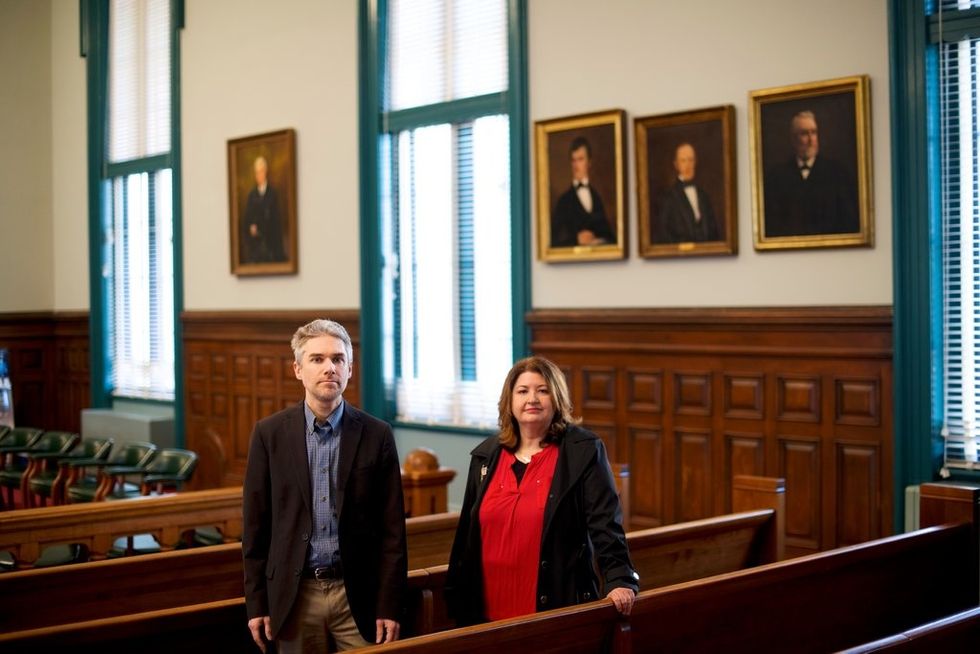 Matthew Munsey, the Northampton County Democratic chairman, and Lee Snover, the county's Republican chairwoman, both had concerns about election security this month.Credit...Mark Makela for The New York Times.

In an era where some candidates and incumbents try to challenge or discredit a close loss by questioning the system, either with unfounded allegations of voter fraud or claims of a "rigged" election, the proper functioning and security of election machines have never been more crucial."There are concerns for 2020," Ms. Snover said, questioning whether the paper ballots generated by the same machine that had a digital error could be trusted. "Nothing went right on Election Day. Everything went wrong. That's a problem."

Election Day here had been marred by complaints of long lines, glitch-prone touch screens and frustrated poll workers. Voters across the county said the experience further eroded their already shaken confidence in the election process.

"It made me sad because with everything that's going on, you kind of worry about: Was something tampered with, or was it just a mistake," said Michelle Broadhecker, 48, of Easton, who said her anxiety about elections began after 2016. "There's just too much going on that you worry about those things. And you don't want the wrong people in the wrong places."

Though there has been no conclusive study as to what caused the machines to malfunction, as the machines are locked away for 20 days after an election according to state law, the prevailing theory is that the touch screens were plagued by a bug in the software. A senior intelligence official who focuses on election security said there were no visible signs of outside meddling by any foreign actors.County officials who led the purchase of the machines have argued that the system actually functioned as it should: The paper ballot backup process worked. The touch screens failed, but the backups had the correct vote, so while it was inconvenient, it proved the necessity of a paper backup.

"We also need to focus on the outcome, which is that voter-verified paper ballots provided fair, accurate and legal election results, as indicated by the county's official results reporting and successful postelection risk-limiting audit," said Katina Granger, a spokeswoman for Election Systems & Software, the manufacturer of the machines. "The election was legal and fair." 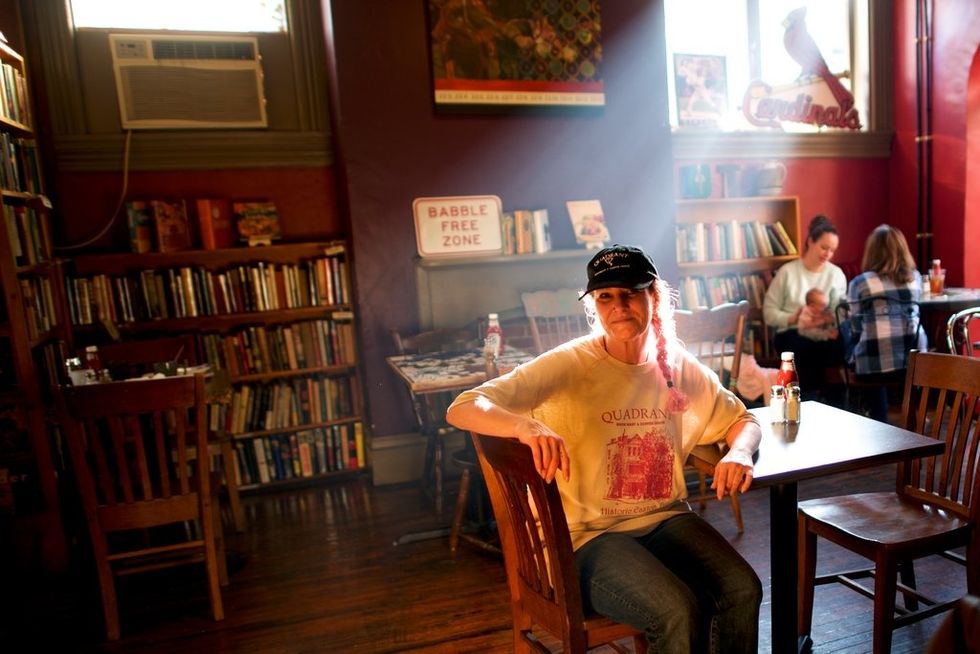 Michelle Broadhecker at the Quadrant Book Mart and Coffee House in Easton, Pa.Credit...Mark Makela for The New York Times.

But for others, it underscored the fractured system for selecting voting systems. Major decisions for testing, purchasing and operating complex machines are often left to county and city officials. Federal testing standards for election machines haven't been updated since 2005, when a large percentage of the machines were not digital."Not only is that a decade before the current cybersecurity threats to our elections, it is two years before the first iPhone," said Kevin Skoglund, a senior technical adviser for the National Election Defense Coalition, a nonpartisan group that focuses on election security issues. "There is a newer 2015 standard, but the Election Assistance Commission lets voting system vendors choose which one to use."

The machines that broke in Northampton County are called the ExpressVoteXL and are made by Election Systems & Software, a major manufacturer of election machines used across the country. The ExpressVoteXL is among their newest and most high-end machines, a luxury "one-stop" voting system that combines a 32-inch touch screen and a paper ballot printer.

To initiate a vote, a voter places a blank ballot-shaped piece of paper in the machine, makes their selections on the screen, and then presses the word "vote." The machine prints a ballot that is protected under a plate of glass for the voter to review. The voter then clicks "cast" on the screen, the digital votes are recorded on a USB and the backup ballot is transmitted to a sealed canister in the back of the machine.

The machines began arriving in the county in August, having gone through a federal and state certification process. The only remaining testing to be done was what officials called a "logic and accuracy test," which is a quick dry run of roughly 20 dummy ballots. But the ExpressVoteXL has an auto-test function in which the machines can simulate a full digital test, a feature that election security experts say is ill-advised."It doesn't test if the touch screen or the scanner work. It doesn't even cast votes for everyone on the ballot," Mr. Skoglund said. "It is especially concerning that it can send made-up votes to the vote counting software without needing a real ballot. Fake ballots are a feature no voting machine should have."

The automatic tests in Northampton proved problematic, and did not even cast a test vote for every candidate, according to test receipts shown to The New York Times. But the machines were still rolled out on Election Day. 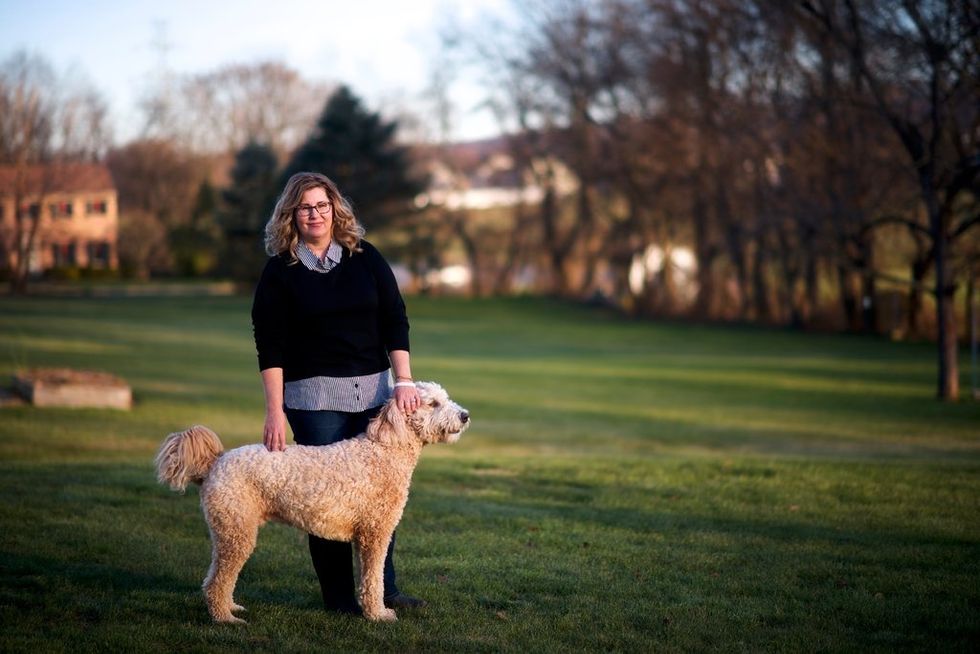 Angela Anderson with her dog, Frankie. Ms. Anderson's vote on the new machine did not register correctly at first; she was able to reset to vote for her party's candidates.Credit...Mark Makela for The New York Times.

And instantly, there were problems.

"I walked into my booth, and I knew that I was going to vote straight Democratic and I'm voting that way until we get some balance back into the government, but when I hit straight Democratic, straight Republican is what registered," said Angela Anderson, 55, of Forks Township, who said that many of her neighbors shared similar stories. "I kind of panicked for a second. But thankfully it easily reset, and I reset my system, and that time it registered Democratic."Deb Hunter, a member of the county election commission, said they were actually lucky that the county judge election went so poorly because that made the problem obvious.

"What would have happened if there was a glitch there that got at a 10 percent or 20 percent undercount?" she said. "That worries me. That worries me going forward."

Ms. Granger noted that there are nearly 6,300 ExpressVoteXL voting machines in use across the country, and none had experienced similar counting problems to those in Northampton County.

It was the way the machines were selected by Philadelphia elected officials that drew the most scrutiny over the last year. Since 2013, E.S.&S. had been courting the two city commissioners who were responsible for choosing the next voting machine, according to https://twitter.com/tanyastwit/status/1160667707399909376?s=21

Trump and his Trumpers- bullies, belittlers. Then they met Greta. She is our present and our future. #Climate https://t.co/Vt4f6LzP42