The lineup is now set for the second series of Democratic presidential primary debates, at the end of the month.

On the first night, progressive favorites Vermont Sen. Bernie Sanders and Massachusetts Sen. Elizabeth Warren will be on stage together for the first time, while upstart South Bend, Ind., Mayor Pete Buttigieg will be trying to continue his improbable rise.

On the second night, the marquee matchup will likely again be former Vice President Joe Biden versus California Sen. Kamala Harris, who had a nasty back-and-forth during their initial debate over Biden's past opposition to busing in some instances.

It is also notable that with race playing such a big role not just this past week in politics with President Trump, but also in this Democratic campaign, that all of the candidates of color ended up being on stage together on the second night. That will make for odd optics on Night One and also potentially creates a difficult position for Biden, given the exchange over school integration in the first debate.

The debates will be held on July 30 and 31 in Detroit, Mich., from 8 to 10 p.m. ET each night. Moderators will be CNN's Dana Bash, Don Lemon and Jake Tapper.

The Pitches: Candidates In The Second Democratic Debates

Twenty presidential hopefuls met fundraising and/or polling thresholds to qualify for the debates. Here's how they're framing their campaigns. 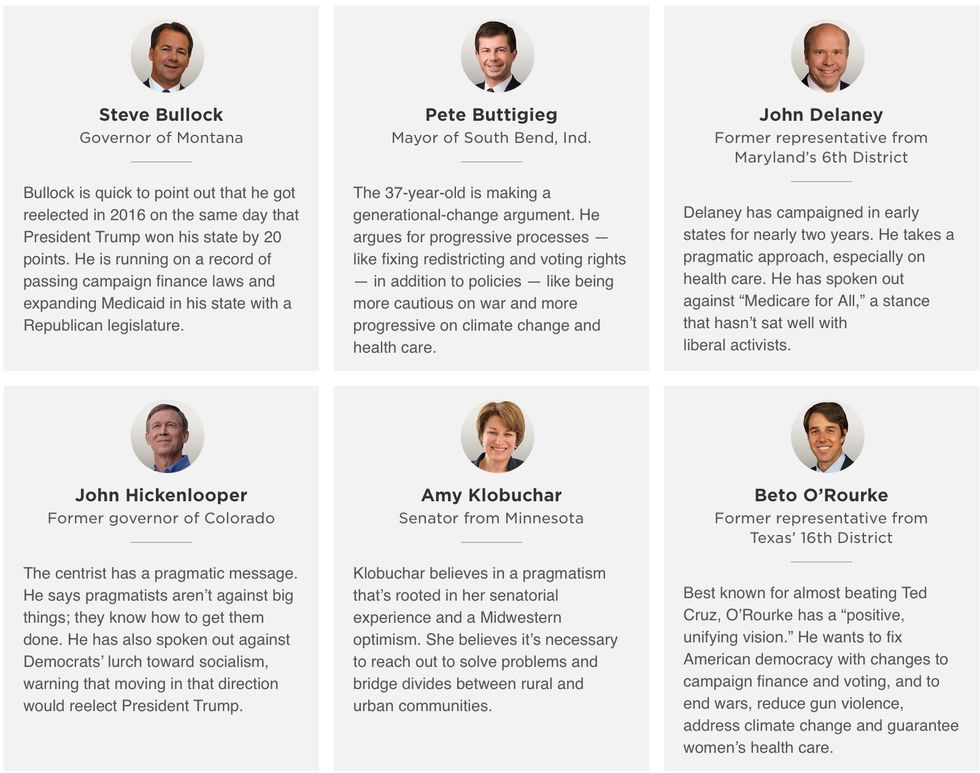 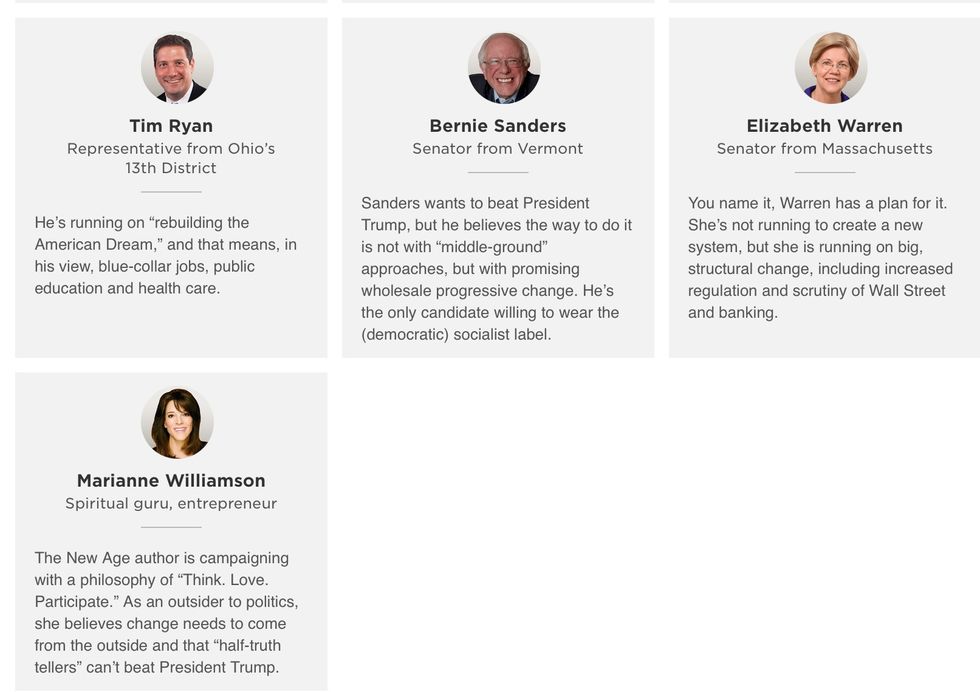 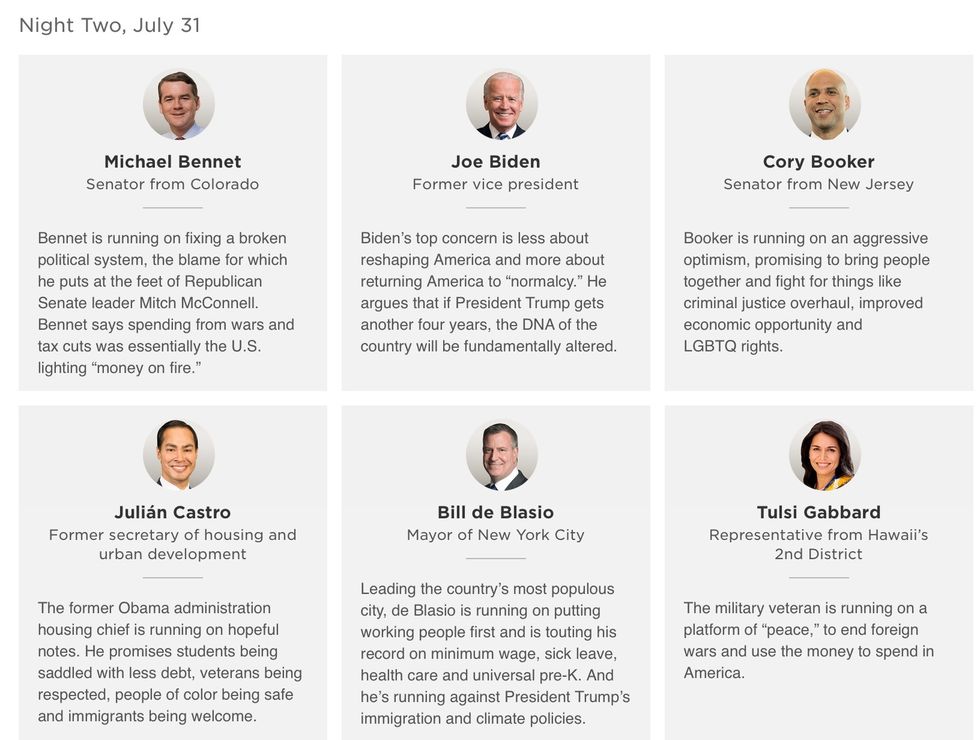 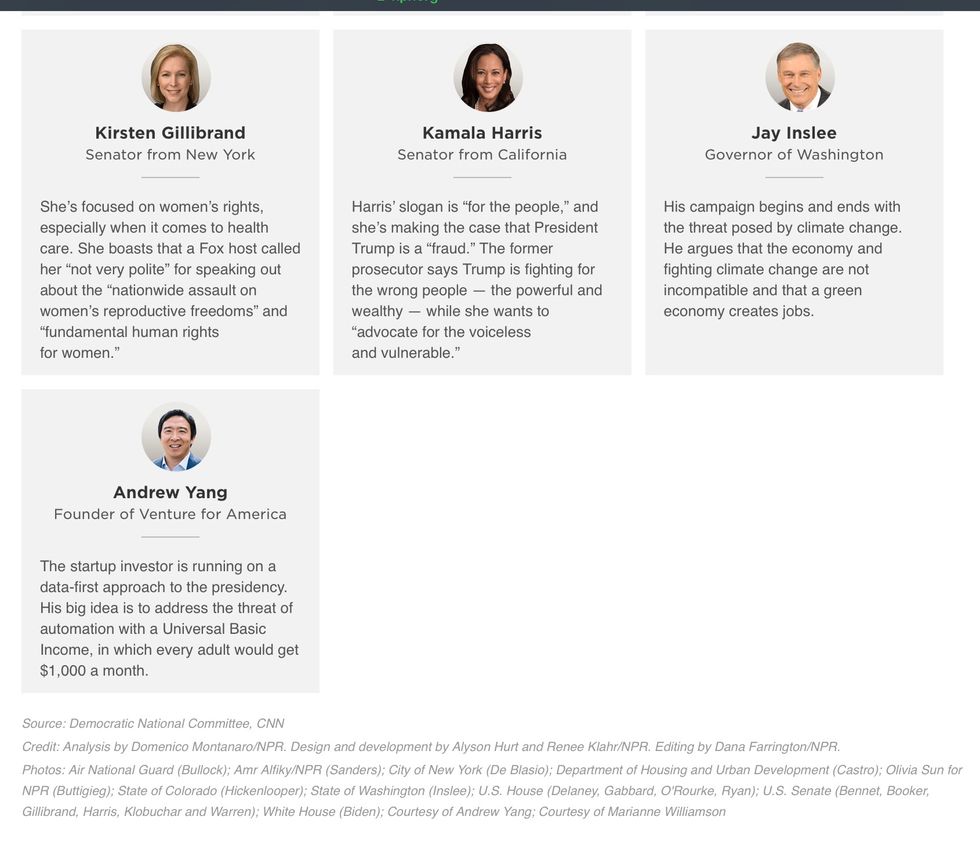 While NBC News, which hosted the first series of debates last month, also held a random drawing in order to determine the June debate stage pairings, it was held off stage and without much fanfare.

But CNN hyped the potential face-offs to the highest drama, showing reporters shuffling names and then doing each drawing live (including from an overhead camera).

However, they also made sure with their lottery that the candidate division would be more equitable, based on polling, across both nights. The network divided the candidates into three buckets and drew participants from each — the four top-tier candidates (Biden, Harris, Sanders and Warren); mid-range hopefuls (Booker, Buttigieg, Castro, Klobuchar, O'Rourke and Yang); and candidates who are mired near the bottom (Bennet, Bullock, de Blasio, Delaney, Gabbard, Gillibrand, Hickenlooper, Inslee, Ryan and Williamson).

In order to make the debate, Democratic hopefuls had to meet either a polling or fundraising benchmark. A candidate had to register at least 1% in three polls recognized by the Democratic National Committee. Or the candidates must have reached 65,000 donors, with at least 200 donors in 20 states. Fourteen candidates met both criteria.

However, the benchmarks will get harder for the next debate in September. Candidates will have to register at least 2% in at least four national or statewide polls recognized by the committee and get donations from at least 130,000 unique donors, along with 400 unique donors in 20 states. If a candidate does not hit both benchmarks, they will be off the stage.

Voices4America Post Script. The stakes couldn't be higher. Get ready for the 2ndDemocratic Debates on Tuesday July 30 and Wednesday July 31. We all need to hear the candidates power and powerful ideas. Invite your friends and family to join you. #DemDebates

As you find or support your favorite candidate/s, remember this - All Democrats-all-stand for:

The Rule of La

Tomorrow we outline a simple way for Americans to hear from witnesses, even if the Republican Senate wants to block them. Given Bolton’s news tonight, it would profoundly betray our Constitution to try to prevent these witnesses from telling the truth. If Rs try,there is a remedy https://t.co/A6OsoJGgBb

‘Cat is out of the bag’: Trump supporter Byron York reverses and says GOP must allow Bolton impeachment testimony https://t.co/dzEP3AgceG

.@billieeilish made history more than once at last night's #grammys: https://t.co/8FVWi2IYmu

😱OMG. The top WH official responsible for preparedness & response to a deadly #pandemic quit, and the global health security team he oversaw was DISBANDED by then-NSA John Bolton in *May 2018*. @thespybrief h/t @911CORLEBRA777 #coronavirus #2019_nCov https://t.co/BwpRSHFgAY

And with this late night tweet the Very Stable Genius has legally waived executive privilege on John Bolton's testimony. Trump has now made their conversations public. History might show this was Trump's most self-damaging tweet. https://t.co/94tVkgoi7i

Send that text. Tell somebody you love them. Miss them. Or just glad they're around. Like that post you've ignored. Don't leave 'em on read. No matter what's gone down or going down. Today's a good day to do it.